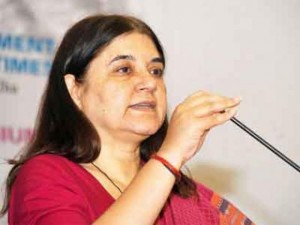 PILIBHIT: Union Minister Maneka Gandhi apparently thinks that her son Varun could reform Uttar Pradesh if he becomes chief minister of India’s largest state.Varun Gandhi, 34, is a parliamentarian who won May’s election from Sultanpur, a constituency that neighbours those represented in Parliament by his estranged cousin and aunt, Rahul and Sonia Gandhi, the top two leaders of the Congress party.
On Saturday, at a speech in her constituency of Pilibhit, Maneka Gandhi said that Uttar Pradesh is in a state of decline courtesy of the ruling Samajwadi Party, which is headed by Mulayam Singh Yadav. Mrs Gandhi, 57, suggested that Pilibhit is being deliberately over-looked for development because Mr Yadav is “punishing” it for electing her.
“Had our party been in power, it would be our right to help you and if Varun were Chief Minister, then think of how much Pilhibit would benefit,” she said.”This (Varun for Chief Minister) is Maneka Gandhi’s personal opinion, it’s too premature to comment on such issues,” said senior BJP leader Laxmikant Bajpai.
The Gandhi family has been estranged since 1980. Former Prime Minister Indira Gandhi, who was assassinated in 1984, had two sons, Sanjay and Rajiv. The former, who was Varun’s father, represented Amethi till he died in a plane crash.After his death, Rajiv Gandhi, who was married to Sonia, became the MP from Amethi. Rajiv and Sonia have two children – Rahul and Priyanka Gandhi Vadra. Rajiv Gandhi was assassinated in 1991. Varun joined the BJP in 2004, along with his mother.