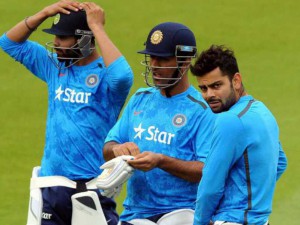 Mahendra Singh Dhoni has indicated that this will be his last Test series in England. The Indian captain said the second Test at Lord’s, which India won by 95 runs on Monday, was his last at cricket’s ‘home’. Dhoni’s hints are always very subtle. That’s also a timely reminder for the national selectors to ‘blood’ a new man in the hotseat.
Asked to reflect on the Lord’s victory, India’s first after 28 years, Dhoni said: “Don’t know how exactly it feels. It will be my last Test at Lord’s. Don’t see myself coming back here in I don’t know how many years. Definitely a memorable Test match.”
“Have had close Tests here. Still remember 2007 series where we drew the match because of bad light, and me and Sreesanth were batting at that time. We saved that Test and went on to be victorious in that series. Every match is special and it’s great to win Test matches outside India. Being Lord’s, yes very special. But at the same time every Test match is special,” the 33-year-old said.
Dhoni’s caliber as a Test captain has often come up for debate. Considered as one of the finest leaders in the shorter formats of the game, Dhoni’s has been found wanting in Test matches. He was severely criticized when India lost the 2011 Test series in England 4-0. Even at Lord’s this time, things started drifting until Ishant Sharma rocked England with a telling spell. England lost five wickets in 33 balls to go down like a pack of cards.
Steve Waugh feels Dhoni is “street-smart” and Indian selectors could look at split captaincy at some stage. The former Aussie skipper feels Dhoni needs to be more attacking during Tests. It is probably easier said than done with a young team.
Dhoni’s position as Test captain seemingly remains ‘safe’ because India don’t have a second leader. Virat Kohli needs to address his batting first. Captaincy surely was a burden for this immensely talented Delhi batsman during the Indian Premier League. In England so far, Kohli has run out of luck after promising starts.
A man who has always led by his “gut feeling,” Dhoni may not get lucky every time. Winning in Lord’s will only raise expectations on Dhoni’s Team India and the skipper will be under tremendous scrutiny and must get every strategy right. Dhoni has to score runs too and ensure that his place in the team is not questioned. Bigger tests lie ahead in Australia later this year. Australia could very well see Dhoni making some interesting career decisions.
But for now, Dhoni is basking in Lord’s glory, especially after reverses in Johannesburg and Wellington earlier this season. Dhoni is impressed by the team’s motivation levels. “It (the win) is a result of hard work and effort of the team. I felt in the last couple of series outside India we were in a position to seal victories in one game each in both places, but somehow we were not able to do that. I felt the bowlers put in great efforts in both matches.
“What was important was to keep working hard. Keep giving the same kind of preparation and thinking into the game. And because of that we have sealed the first game for this team. It was fantastic to see the kind of effort and determination from this team,” Dhoni said.
Dhoni believes in a process. Success is always the end result of a solid process. Success is also about continuity. When Dhoni took over as India’s T20 captain in September 2007, he tasted success winning the ICC World T20 in South Africa. Dhoni became India’s full-time Test captain quite by default. In the fourth and final Test against Australia in Nagpur he took over the captaincy after Anil Kumble was injured and subsequently retired.

Since then, it’s been an amazing success story, both from a team and personal standpoint. Currently valued at $21 million, Dhoni is the fifth most valuable athlete in the world, according to Forbes. Dhoni has achieved everything a captain can think of. He need not return to Lord’s to prove anything again.