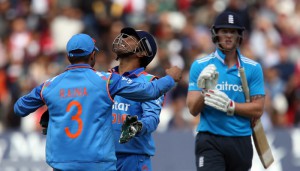 NEW DELHI : Mahendra Singh Dhoni’s stint in ODI cricket kept going better as the Indian captain continued to shatter records in the limited overs format. India registered their second consecutive win, defeating England by six wickets at Trent Bridge, to take a 2-0 lead in the five-match ODI series. Dhoni equalled former India skipper Mohammad Azharuddin’s record of 90 ODI wins, the most by an Indian captain.
As statistics go, Azharuddin took nine years between 1990 and 1999 and 174 matches to get to the milestone, Dhoni has done it in only seven years and 161 matches. He is now braced to become the first Indian to lead the country in 100 ODI victories.Dhoni’s record as captain against England in ODIs is outstanding, with 16 wins and five losses out of 24 (two tied and one no-result). He has a winning percentage of 73.91. The Trent Bridge win was also India’s seventh successive in England, a successful run that started in the Champions Trophy last year.
Dhoni on Saturday, also registered another record as wicketkeeper. He now has the most international stumpings (131) and is now ahead of Kumar Sangakara of Sri Lanka, who has 129 stumpings to his name. While Dhoni achieved his milestone in 381 matches, Sangakkara took 563 matches to get there.
Dhoni’s leadership in Test cricket has often been below par but his records as an ODI skipper continue to be outstanding. However, his biggest challenge will be to build a side that can defend the World Cup in Australia next year. With the performances against England in the first two matches, the team looks positive and balanced.
After a disastrous 1-3 Test series loss against England, Dhoni’s captaincy on this tour has come under severe criticism. But his batting has been rather consistent and he stood out when the rest of the pack fell. After hitting four half-centuries in the Test matches, he slammed a fifty in the second ODI in Cardiff to help India in gaining momentum towards the latter half of the innings.
The spinners are doing a good job for Dhoni and he will want the roll to continue further in the series. India is one match away from sealing the ODI series.