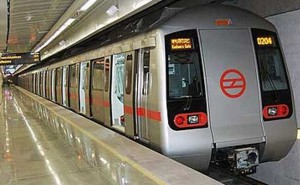 NEW DELHI: In a move to address space constraint, Delhi Metro’s upcoming Mayur Vihar Phase I interchange station will stand on a row of specially designed pillars along the middle of a narrow stretch of road, giving it a flying-like impression.
The decision to use cantilever technology– where the station will stand on single piers along the centre of the road, as opposed to the standard construction procedure where two more piers stand on either ends of the road–was taken by DMRC as Khudiram Bose Marg, on which the station is coming up, has a width of 22 metres only.
“Due to space crunch, the ancillary units like the control rooms and other operational units will be housed in a separate three-storey building in a park just next to the station,” a metro official said.
Passengers will be able to move between the upcoming station, to be located at a height of 22 metres, and the existing station at a height of 12 metres through the paid area as the two will be connected through a 102-m long corridor.
“Keeping in mind the height difference of 10 metres, we had to add one extra mezzanine floor between the level of the two stations to maintain the proper slope of the corridor so that the passengers are able to move seamlessly from one concourse area to the other,” the official added.
More challenges are involved in the construction of the station as the viaduct of the upcoming line will have to cross over the Delhi-Noida link road flyover as well as the operational blue line corridor. On top of that, the Barapullah elevated corridor will also be extended till the station.
The foundation work of the station is complete and the first pier is on its way of completion.The station will be a part of the 58 km long Mukundpur- Shiv Vihar corridor, the longest line in metro’s Phase-III which will cover the arterial ring road, of which 19 km will be underground and 39 km elevated with 12 underground and 26 elevated stations.
The line, with a total of nine interchange stations, will significantly reduce the distance between South Delhi and East Delhi.
According to official estimates, about 1.13 lakh passengers from the nearby areas of Vinod Nagar, Trilokpuri, Mayur Vihar Pocket-I are expected to use the new interchange facility by 2016.