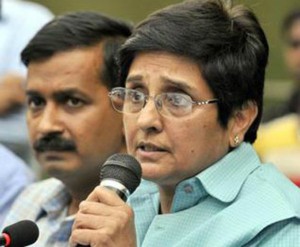 NEW DELHI: In the run-up to Assembly Election in Delhi, an article in a RSS mouthpiece has admitted “cut-throat contest” between the Bharatiya Janata Party (BJP) and Aam Aadmi Party (AAP).
Asserting that albeit there has been an erosion in AAP’s popularity amongst the middle-class since Arvind Kejriwal resigned after 49 days in power, yet, the Organiser said, the BJP is not in a comfortable ground at present. The Organiser further called Congress “a non-entity” in this election.
It was after receiving adverse feedback from the field against the Delhi BJP that the top BJP leadership inducted Kiran Bedi and projected her as party’s Chief Ministerial candidate, the RSS mouthpiece said.
“Kiran Bedi’s induction will definitely act positive for the BJP, as a large chunk of Punjabi votes would come to the party. Moreover, considering her previous work as a police officer in Delhi and decaying law and order situation at present, and rising crime against women, a big number of votes of women would go to her,” the article quoted a political commentator as saying.
The article, written by the magazine’s Delhi Bureau, confirmed that there was resentment among a section within the state unit after Bedi was named as CM nominee. However, the campaigning has taken to a top gear in the BJP and the party leadership has recalibrated its poll strategy, the article said, adding, Kiran Bedi is a “perfect choice” to counter Arvind Kejriwal.
Admitting that the AAP has managed to reclaim a large portion of its lost ground through constant field work and ‘anti-establishment’ rhetoric, the article mentioned that the cadre belonging to Kejriwal-led party has made its strong presence felt at the booth-level.
The AAP, the Organiser said, “is expected to gain from the pockets like slum-dwellers, resettlement colonies, a section of the lower-middle class and minorities (especially Muslims), a considerable chunk of urban youth especially those either involved with NGOs or harbour Left or Ultra-Left ideology”.
While giving nod to the BJP’s move to call in both star power and manpower to the campaign, the article warns against “negative comments” by party leaders on social media.
“…In this age of social networking and social media, the BJP, which otherwise have proved to be highly active on this medium due to Modi, needs to take care of it, ensuring lesser negative comments by its leaders on Twitter or Facebook,” it says.
The article also considered that the visit by US President Barack Obama could help the BJP. “No doubt Delhiites are eagerly waiting for the Modi magic to work. The analysts feel that the US President Barack Obama’s three-day India visit and the developments happened on India’s strategic and trade fronts would go in favour of BJP in Delhi election.”