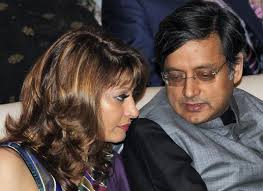 NEW DELHI : Taking forward its ongoing probe into the Sunanda Pushkar death case, the Special Investigation Team (SIT) of Delhi Police is reported to have questioned the crew of Air India flight on which Congress leader Shashi Tharoor and his deceased wife had an altercation on January 15 last year.
Media reports on Friday claimed that the Air India crew was questioned by the SIT yesterday.The SIT may also question a senior Congress leader, who was on the same flight, to know what actually triggered the altercation between the couple, a senior Delhi Police official associated with the probe indicated.
The development comes a day after Tharoor lashed out at the media, saying he was being “defamed day in and day out”.Tharoor, who refused to take any questions related to his wife’s death regarding which Delhi Police filed a murder case last week, said the advent of 24/7 TV channels and the pressure of breaking news and TRPs has led to a race to the bottom in terms of sensation, voyeurism and headline grabbing.
“I have been misquoted in media, being defamed now day in and day out,” the former union minister told reporters here.Describing the media as “free and irresponsible”, he said, “90 percent of Indian journalists do not record what I am saying. Almost every quote attributed to me in the Indian media is an inadequate para-phrase by the journalist of what he thinks I said.”
Sunanda, who married Tharoor in 2010, was found dead a year ago at a five-star hotel in the national capital. She had checked into The Leela Hotel in Chanakyapuri a day before her death on January 17, 2014.
Tharoor’s aides said the couple had checked into the luxury hotel because of renovation work at his Delhi bungalow.Prior to her death, Sunanda was embroiled in a spat with Pakistan-based journalist, Mehr Tarar, whom she accused of stalking her husband.