NEW DELHI : Spelling more trouble for the Congress, a sting operation by Cobrapost has claimed that the Delhi Police acted in connivance with the then state government during the 1984-anti Sikh riots.The sting shows many Delhi Police officers alleging that some top brass officers worked in tandem with the government to teach Sikhs “a lesson”. The officers also admitted that they failed to act as a force. 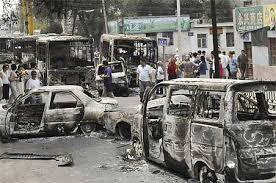 The Cobrapost interviewed police officers – Shoorveer Singh Tyagi, then Station House Officer (SHO) Kalyanpuri; Rohtas Singh, SHO Delhi Cantonment; SN Bhaskar, SHO Krishna Nagar; OP Yadav, SHO Srinivaspuri; and Jaipal Singh, SHO Mehrauli.While the then Police Commissioner SC Tandon evading all the questions by the undercover reporter, ex-Additional Commissioner of Police, Gautam Kaul, said that he had no first-hand information of rioting.
Amrik Singh Bhullar, the then SHO of Patel Nagar, in an affidavit had named some local leaders of participating in the 1984 riots and inciting the mob.According to a report published on the Cobrapost website, the police force had succumbed to anti-Sikh sentiments, thus abetting rioting and arson, even encouraging rioters.
Some of the confessions made by the police officers who were interviewed during the sting operation:
The senior police officers did not pay heed to warnings of simmering tensions against the Sikh community.The police control rooms recorded only two percent of the messages of rioting, whereas the stations were bombarded with the news of arson.The police logbooks were changed to destroy evidence of inaction on the part of senior officersMany police officers didn’t act due to fear of being transferred.
Messages were broadcast to not to take action against rioters shouting slogans of “Indira Gandhi zindabad”. Not only this, the dead bodies of riot victims were dumped far away from the scene of the rioting to reduce the official toll of the riots.Some senior officers didn’t allow the junior rank officials to fire on rioters.Fire Brigade refused to go to areas where cases of arson were reported.
Three police officers of SHO rank accused the ex-police chief for mismanagement. Shoorveer Singh Tyagi criticised Tandon for acting under the influence of the government of the day. While, OP Yadav accused Tandon of not providing leadership to the force, another officer SN Bhaskar said that instead of singling out some station house officers, the police chief’s head should have rolled.