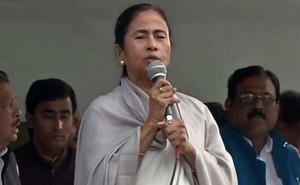 NEW DELHI : As Arvind Kejriwal’s Aam Aadmi Party headed for a massive victory in Delhi today, Bengal Chief Minister Mamata Banerjee was one of the first to take a swipe at Prime Minister Narendra Modi and his BJP, commenting that the verdict was a “turning point” and the “country needed this change.”
Ms Banerjee tweeted, “My congratulations to all the Delhi voters, AAP workers and leaders for big victory. Well done to you. All my best wishes. We are very happy.”
In a series of tweets, the West Bengal Chief Minister also said, “This is a victory for the people and a big defeat for the arrogant and those who are doing political vendetta & spreading hate among people.”
Just before the election on Saturday, Ms Banerjee had made an unusual appeal to the people of Delhi to vote for Mr Kejriwal’s party.

“My request to all of you in Delhi to please vote for AAP. For the greater need of the country and development in Delhi,” she had tweeted. Many others like the Samajwadi Party and the Janata Dal United took her cue and made similar appeals.
Ms Banerjee and her Trinamool Congress are confronting a stronger BJP in Bengal than ever before. In last year’s national election, the BJP won two parliamentary seats, allowing it a foothold in a state where it had been a non-entity.
BJP president Amit Shah’s massive recruitment drive and rallies have rattled the state’s ruling party ahead of next year’s assembly election.Some of Ms Banerjee’s top leaders – like former union minister Dinesh Trivedi – are reportedly in negotiations to move over to the BJP.
Mr Kejriwal and Ms Banerjee have both shared warm ties with Gandhian activist Anna Hazare.Mr Kejriwal was Anna’s closest aide in the India Against Corruption campaign in 2011 but lost his support when he launched the AAP in 2012. Last year, ahead of the national election, Anna praised what Mamata Banerjee’s austere habits and strong leadership, but then cancelled his appearance with her at a rally at the last minute.