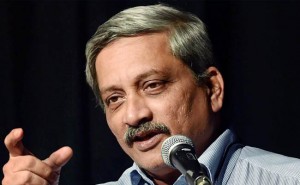 NEW DELHI : Defence Minister Manohar Parrikar was referring to IK Gujral, say sources, when he dropped a bombshell by alleging that “some former Prime Ministers compromised India’s deep assets” on national security.
Mr Parrikar did not name anyone when he made the comment while explaining why he did not want to reveal details about a Coast Guard operation on December 31, in which a boat from Pakistan blew up after being intercepted off the Gujarat coast. The source of information might have been compromised, he said.
Sources said today that the Defence Minister was referring to the dismantling of India’s intelligence network in neighbouring countries during Mr Gujral’s tenure as PM under what was called the Gujral Doctrine on foreign policy.
Inder Kumar Gujral was the Prime Minster for just under a year in 1997-98 at the head of a United Front government supported by the Congress. He died in 2012.
A furious Congress, which has been in power for much of the past six decades and has given the country six of its 17 Prime Minsters, asked the Minister to either give names or apologise. Congress leader Manish Tewari said the Defence Minister has made a “very grave charge.”
At an event in Mumbai, Mr Parrikar said about the Pakistan boat that blew up, “We intercepted it from 200 km away. For 24 hours, the boat was going in circles. Is that not enough proof? What more do you (reporters) want? I was asked to give ‘proof’ but I refused. I said ‘absolutely not’ because the source might be compromised. You have to build assets and you have to build deep assets. Deep assets are assets which have to be created over 20-30 years, but this country has seen PMs who have compromised deep assets. I won’t take names. Many people know.”
Opposition parties, including the Congress, had questioned the Coast Guard operation and demanded evidence that the vessel that exploded with four men on it, was carrying suspected terrorists.
Mr Parrikar mocked the Congress for making the demand. “Tomorrow, during such an operation, we will take along a cameraman and also the Congress spokesperson,” he said.