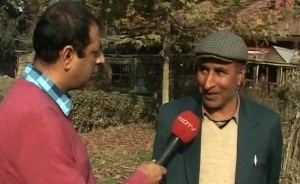 NEW DELHI : A Congress election candidate from Jammu and Kashmir’s Ganderbal has courted controversy by putting down “unmarried daughter’s marriage” in the liabilities column of his nomination form. Mohd Yusuf Bhat has said his entry has been misinterpreted. He said he did not mean that a daughter was a liability.
“A daughter is the light of the house. But a father has to spend money for a daughter’s education and marriage”. By “liability”, he meant his daughters were “dependent” on him till their marriage, because they were not earning, he said.  “My son is working, he has a family, so he is not dependent, but my daughter is dependent,” he added.
But his explanation has not pacified women, politicians or activists.  “I don’t how such candidates are contesting elections. The Congress is answerable for this,” said Junaid Mattu of the National Conference.Even Chief Minister Omar Abdullah tweeted:
Senior Congress leader Ambika Soni said Bhat has used a wrong word. “English is not his mother tongue as it is not yours or mine. He doesn’t mean liability. He means, I’m sure and confident, he means dependent,” she said. “If he was writing in Kashmiri, I’m sure he wouldn’t have made that mistake.”
Mr Bhat, who recently joined the Congress after parting ways from National Conference, has been in the limelight earlier as well.He was a key witness in the case of Haji Yousuf — a senior National Conference leader whom Mr Bhat had accused of taking money, promising him a berth in the Legislative Council. Yousuf died in police custody, a day after Chief Minister Omar Abdullah called him to his residence and handed him over to the Crime Branch.