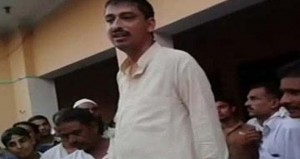 NEW DELHI : Congress spokesperson Randeep Surjewala Friday defended the party’s candidate from Saharanpur, Uttar Pradesh, Imran Masood who reportedly threatened to “chop up” BJP’s prime ministerial candidate Narendra Modi.Surjewala said Masood’s statement has been distorted. “We have spoken to Masood about this. We have asked him to issue a clarification to the media if he thinks he was misquoted,” Surjewala said.
Masood, the Congress candidate from Saharanpur in western Uttar Pradesh, at a public rally reportedly said that he was ready to give life and take life, and that he would “chop up” Narendra Modi into pieces.“What does Modi think. There are only four percent Muslims in Gujarat. There are 42 percent Muslims here (Uttar Pradesh),” Masood said.The controversy comes before Congress vice president Rahul Gandhi is scheduled to address an election rally in Saharanpur Saturday.