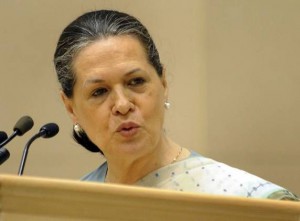 NEW DELHI : Reacting to Congress’ poorest performance in Maharashtra and Haryana Assembly elections, party president Sonia Gandhi on Sunday said that her party accepts the verdict in both the states with humility.
“We hope that the parties which will be forming government in both the states fulfil promises they had made before the elections,” Gandhi quoted as saying by A News Agency. .
Talking about the Congress’ future strategy, Gandhi said that her party will play constructive and vigilant role in both the states.
Besides Sonia, the Congress vice president Rahul Gandhi had earlier in the day congratulated Bharatiya Janata Party for its success in Maharashtra and Haryana.Congress will work hard on the ground to once again earn people’s confidence, said Rahul, after his party faced a rout in the Assembly Elections in both the states.He also thanked party workers for their commitment and support.
As per trends, BJP has emerged as single largest party in Maharashtra and has clean sweep in Haryana. In Haryana, the BJP seems to be winning more than half of the total seats. While Indian National Lok Dal (INLD) is emerging as the runner-up, the Congress is shown to be winning only 15 seats.
Meanwhile, in Maharashtra, the recent trends show that BJP will win 121 seats, followed by Shiv Sena with 49 seats and Congress by 36 seats.