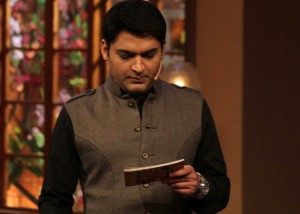 MUMBAI: Comedian Kapil Sharma’s hugely popular TV show Comedy Nights With Kapil will go off air in September. But luckily for his fans, the show is not getting cancelled permanently, it’s just taking a break. Kapil confirmed the news on June 15 when he tweeted:Ever since Kapil signed on to do his first full-fledged movie, Bank Chor, with Yash Raj Films; rumours were rife that he will reduce his TV and live show appearances in order to accommodate the film’s shooting.
The most talked about solution which may have worked for both Kapil and the channel Colors seemed to be Comedy Nights moving back to its once-a-week format from the current two shows a week one. But things didn’t work out and last week news emerged that the channel has refused to turn the show into a once-a-week affair.
Kapil had also revealed why he can’t pre-shoot the episodes to create a bank. “”I can’t create a bank of episodes for two months when I shoot my film because all the stars who come on my show do so when they are promoting their films. I can’t tell them, Aap pehle aa jao kyonki meri film shooting hai(Please come on the show earlier because I am busy shooting my film),” Kapil had said.
The show also features other comedy artists like Ali Asgar and Kiku Sharda, both of whom play female characters on the show. The show has featured many superstars on it including Shah Rukh Khan, Salman Khan, Amitabh Bachchan , Madhuri Dixit and Akshay Kumar. Apart from actors promoting their films, the show has also witnessed cricketers and few other celebrities as guests.
Looks like putting the show on the backburner was the only thing Kapil and the channel could agree on. Hopefully for his fans, he will back with the show soon as he promises.