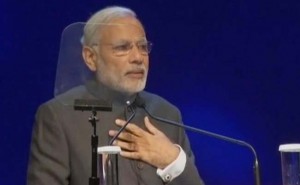 KUALA LUMPUR: Prime Minister Narendra Modi today asked the global investment community to invest in India and draw comfort from its fast economic growth, strong fundamentals, continuous reforms and a welcoming environment.
“By almost every major economic indicator India’s doing better than when we took office 18 months ago,” the prime minister told the ASEAN-Business and Investment Summit, listing such positives in growth, inflation, interest rates, fiscal deficit, foreign capital inflows and tax revenues.
“Obviously, this did not happen by accident. The world economy is not exactly doing well. This success is the result of a series of concerted policies,” he said, adding the idea was not to reform alone but to reform for transformation.
“Most of the ASEAN economies have done their bit for Asia’s resurgence. Now it is India’s turn,” PM Modi said to a loud applause after his arrival in Kuala Lumpur in the early hours of Saturday for the 13th ASEAN-India Summit and the 10th East Asia Summit.”We know that our time has come.”
The prime minister also outlined a host of steps taken to make his country an investment friendly destination, notably through campaigns like “Make in India”, “Digital India” and “Skill India”. “I invite you to come and see the winds of change in India,” he said.

“Winds take time to cross the borders. That is why I am here to invite you personally.”PM Modi said his government was working hard to cut complicated procedures and making them available on one platform, preferably online, besides simplifying forms and formats on a war footing.
“That’s how we have jumped up by 12 ranks in the World Bank’s Ease of Doing Business Report of 2016.”This, he said, has also resulted in foreign investment inflows growing 40 per cent this year, and the country jumping six places in Unctad’s ranking of investment attractiveness and the World Economic Forum’s Global Competitiveness Index, besides an outlook upgrade by Moody’s.

Listing some recent initiatives, he said foreign equity caps were eased in some key sectors such as insurance, defence and railways, permissions for approvals were placed under automatic route, foreign portfolio investment norms were relaxed and the regime of retrospective tax had ended.
“These are just a few examples. Almost on a daily basis, we are trying to remove the bottlenecks that were affecting our growth process. Even early this month, we took very dynamic steps to further open up the economy for foreign direct investment,” he said.

“With this round of reforms, we are among the most open economies in the world.”The prime minister also sought to address some of the concerns the global investors had.
“Going further, I want to assure you that India is committed to protecting intellectual property rights,” he said, adding: “We’re moving fast to make sure our tax regime is transparent and predictable.”He assured that genuine investors will get quick, fair decisions on tax matters.