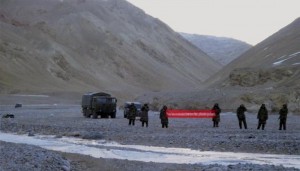 NEW DELHI : Escalating the Indo-China border tensions, Chinese troops intruded 500 meters and put up tents into Indian territory, as per reports on Sunday. “Some 30 Chinese soldiers invaded 500 meters area of Demchok in Ladakh on September 11,” say reports. However, to confront the Chinese troops, around 70 Indo-Tibetan Border Police (ITBP) personnel were deployed in the region.
Last month, the Chinese troops reportedly entered almost 25 kms into India. The troops invaded the area of Burtse in Ladakh. A patrol of Indian troops noticed the People’s Liberation Army (PLA) personnel while moving from their base in Burtse area of north Ladakh, at an altitude of around 17,000 feet. In 2014 alone, 334 incidents of Chinese troops intrusion into Indian border have been reported.
The recent intrusion incident was reported a few days prior to Chinese President Xi Jinping’s visit to India. Jinping is scheduled to visit Ahmedabad where he will be meeting Prime Minister Narendra Modi and expected to witness the signing of several MoUs in business and infrastructural investment.
Meanwhile, Anti-China atmosphere in India is easing since Prime Minister Narendra Modi took over and bilateral ties have “rosy prospects” in view of Chinese President Xi Jinping`s forthcoming state visit to the country, an article in the official media here said Monday.
“Modi has been an old friend of China for many years. There has been an anti-China atmosphere among India`s public opinion since 1962. However, such a sentiment has been mitigated since Modi assumed office,” said an article titled `China, India should make endeavours toward their shared destiny` in the state-run Global Times.
“Of course, more time is needed to eliminate such a mentality. The two governments and peoples should spare no effort to improve bilateral relations,” said the article by Tan Zhong, a Chinese scholar on Indian affairs based in the US.
“His (Modi`s) guiding principle toward China is peace, friendship, cooperation and communication. With Chinese President Xi Jinping`s state visit to India drawing near, the Beijing-New Delhi relationship has rosy prospects,” it said.
Highlighting Modi`s plans to rejuvenate India`s economy and remove all the barriers to facilitate economic development, the article said India and China should build on community of shared destiny.”Such a community, with a population of 2.5 billion, will be of remarkable significance and play an important role in shaping the new global order,” the article said.
Modi is unwilling to adopt major changes to the foreign policies of the previous government, it said.China has envisioned a Silk Road economic belt and the 21st century maritime Silk Road, which will be the theme during Xi`s India trip,” the article said.
Xi`s visit is expected to take place in the third week of next month though the schedule is yet to be announced. The Qinghai-Tibet railway stretching from Lhasa to Shigatse has already been opened to traffic, the article said pointing to the launch of the new railway project in Tibet which comes close to the Indian border near Sikkim.
“All these are laying a solid foundation for the construction of a Sino-Indian community of shared destiny. The Silk Road in history started from China and India and then extended to Europe. And Buddhism was spread to China through this road,” it said.”It is high time that the two countries make concerted efforts to create a community of shared destiny,” it added.