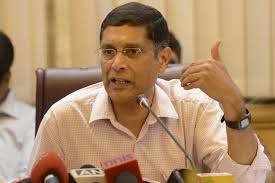 NEW DELHI: The slowdown in China is a historic opportunity to relaunch growth in India, Chief Economic Adviser Arvind Subramanian said today.
“China slowdown is a historic opportunity for India as Chinese production becomes less profitable, India could become profitable but not guaranteed. India is a net importer, so China slowdown is an opportunity to relaunch growth in India,” Subramanian said while delivering a speech during Institute of Chinese Studies event here.

The Chief Economic Adviser said investment from companies like Foxconn of Taiwan and Xiaomi of China suggest that companies based in China might now view India as a hedge against the slowdown.
On the recent repercussions which rose due to depreciation in their currency Renminbi (RMB), Subramanian said since India is not part of the Chinese value chain, the slowdown in China has left India relatively unscathed.
Talking about RMB, he said India has an unambiguous interest in supporting it becoming the part of SDR (Special Drawing Rights) basket.
“On the Renminbi, I think we have an unambiguous interest in supporting the Renminbi becoming the part of SDR basket. I said so because essentially as the Chinese currency becomes more and more international, china will have to open up its economy which is good for the world, good for China.
“And also China will be able less to manipulate its currency, keep it low, which could be disadvantageous for China. So we have a strong stake in that the Chinese currency becomes internationalised.”

He said China should be allowed to get the geo-political benefits arising out of its currency becoming more international because the concrete economic manifestation is that it will both open up and tie Chinese economy.