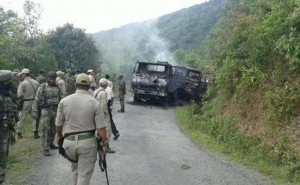 NEW DELHI:  A subtle Chinese hand was suspected in the ambush of 18 soldiers in Manipur on June 4.  Trying to connect the dots, investigators have now come up with more evidence of Chinese intelligence dabbling with north-eastern rebel groups.
18 armymen were killed and at least 11 injured when militants ambushed their convoy in Manipur’s Chandel district, in what is being described as the worst casualties the Army has suffered in recent years.
The ambush was carried out by cadres of National Socialist Council of Nagaland – Khaplang or the NSCN (K) with help from other groups like United Nation Liberation Front (UNLF), which are part of militant umbrella organisation – United Liberation Front of Western South Asia, a group believed to have been propped up by China.
Apart from the Nagaland based NSCN(K), groups like Assam based United Liberation Front of Assam-Independent or the ULFA (I), National Democratic Front of Bodoland-Sonbijit or the NDFB (S) and the Manipur based Kanglei Yawol Kunna Lup or the KYKL and others are part of the new formation.
The NSCN (K) abrogated a decade long cease fire agreement with New Delhi just days before carrying out the strike on June 4.National Investigation Agency (NIA) investigators say that the chief of Manipur rebel group United National Liberation Front (UNLF), R K Meghen has told them that their group has been in touch with China since 2008. He also said that they met a Chinese agent in Katmandu in 2008, with the code name “Alex”. UNLF believes that this agent based out of Hong Kong.
Later, Meghen was invited by Chengdu Source Management Consultancy Group, a Chinese company during his visit to China in 2009. The UNLF chief has told NIA that he visited Sichuan University among other places.
A senior intelligence officer told to a TV Channel , “We have often seen Chinese intelligence working through companies as fronts.”Meghen has also told investigators that Alex proposed selling 2000 pieces of Rocket Propelled Grenades to the UNLF in 2009, the delivery was fixed on the “Sino-Myanmar border.”

Subsequently, the Chinese intelligence got in touch with UNLF, this time through another private trading company – Aye Kyi Kaung Co Ltd. This meeting took place in town of Ruili in western Yunan, where the Chinese wanted to know about Indian troop and missile deployment in the North East, according to investigators.

A similar description of China dabbling with North Eastern rebels had emerged through N Kitovi Zhimomi, a senior member of the NSCN(K) who had parted ways with the group after falling out with his Myanmar based boss, SS Khaplang.  Though Kitovi’s group is keen to enter into a peace dialogue with India, he says the abrogation of the ceasefire was coming for a long time.
Kitovi told NDTV, “The formation of United Liberation Front of Western South Asia was the last and final step. I know them (the Chinese), and may have even met them but I don’t like them because they won’t help the Naga cause.”
The former NSCN (K) member also told investigators that Khaplang wanted to abrogate the cease fire in 2011, but couldn’t because of pressure from Naga society. He had also been to China on various errands for his group then.