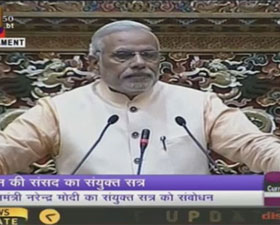 THIMPU/NEW DELHI : Addressing the joint session of Bhutan Parliament, Prime Minister Narendra Modi said the relationship between India and Bhutan is historic and the new government is committed to make it even stronger. “Our hearts are always open for friendly relations with neighbours. A change in governance will not change that,” Modi said.
“A strong and stable India is needed to make sure that we can help our neighbours with their problems. The stronger India will be, the better it will be for Bhutan and the SAARC nations,” he said.
“If India was to face economic problems then how can it look after its neighbours?” he said Praising the Bhutan royals for protecting people’s rights, Modi said Bhutan has established democracy among its people through awareness and strong democratic traditions. “I congratulate the political family of Bhutan for securing development, protection of traditions and environment,” he said.
“Enthusiasm visible in voters of Bhutan is very important for a vibrant democratic environment…The most important quality for maintaining democracy is self-reliance,” he said. “When the world was moving for centralisation of power, Bhutan strengthened democracy. In many parts of the world when there is politics of expansionism, democratic principles were strengthened in Bhutan,” he said, adding that the smooth transition from monarchy to democracy shows maturity in governance in Bhutan.

Bhutan is working hard not only for the present but also for the happiness of further generations,” he said.
Modi praised Bhutan government for its focus on education. “Delighted that in 2014 Budget, Bhutan has devoted a lot of resources towards education. When a country provides teachers to educate its society, it strengthens democracy,” he said.
The Indian Prime Minister said that India will assist Bhutan in forming an E-library network to strengthen the Bhutanese government’s intention to promote education.
Modi also proposed to hold a sports meet for Himalayan states in India and Bhutan. “I thought – all Himalayan states and Bhutan- can we not do a special sports meet on a regular basis. Sportsman spirit brings happiness,” he said.
“Himalayas bring us together. We must be very proud of the Himalayas. It is our strength,” Modi added.
Later in the day, PM Modi will lay the foundation stone of the 600 MV Kholongchu hydropower project.
The Bhutanese King Jigme Khesar Namgyel Wangchuck will host a lunch for the visiting dignitary and his delegation before they leave for New Delhi.
On Sunday, Modi inaugurated the new Supreme Court building in Bhutan, built with Indian assistance.
Modi also promised help in increasing educational contacts and suggested doubling of scholarships being provided to Bhutanese students in India.
Speaking at a banquet hosted by Bhutanese Prime Minister Tshering Tobgay, Modi reassured Bhutan about continued special treatment by India despite the change of government in Delhi.