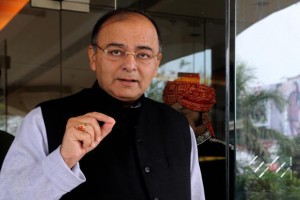 NEW DELHI: In a bonanza, the 14th Finance Commission has recommended a record 10 percent increase in the states’ share in the Union taxes to 42 percent, which has been accepted by the Centre and will give the states an additional Rs 1.78 lakh crore in 2015-16.

The report of the Commission, headed by former RBI Governor Y V Reddy, also recommended a grants-in-aid of Rs 48,906 crore for 11 revenue deficit states, including Andhra Pradesh post division, West Bengal and Jammu and Kashmir, for 2015-16.
For the period up to 2020, it will be over Rs 1.94 lakh crore.The total devolution to the states in 2015-16 will be Rs 5.26 lakh crore, as against Rs 3.48 lakh crore in 2014-15, representing an increase of Rs 1.78 lakh crore.
The total devolution to states during the five year period up to 2019-20 will be Rs 39.48 lakh crore.Addressing a press conference, Finance Minister Arun Jaitley said the Centre has accepted the recommendations of the Finance Commission and it shows NDA government’s commitment to cooperative federalism.
In a letter to all Chief Ministers, Prime Minister Narendra Modi said the increased money with states will give them the required freedom to tailor make development schemes to suit their needs.
Besides raising the share of states in the divisible pool of central taxes from 32 percent previously to 42 percent, the Finance Commission also provided for Rs 2.87 lakh crore for five year period for Panchayats and Municipalities.
“The higher tax devolution will allow states greater autonomy in financing and designing of schemes as per their needs and requirements,” the report said. Jaitley said 42 percent increase in states’ share is “the largest ever change in percentage of devolution. In the past, when Finance Commissions have recommended an increase, it has been in the range of 1-2 percent.”
He further said that as compared to the devolutions in 2014-15, the total outgo towards the states in 2015-16 will see an increase of over 45 percent.
The Commission suggested a fiscal deficit target of 3.6 percent for 2015-16 and 3 percent in subsequent years.Abhijit Sen, one of the four members of the Finance Commission, has submitted a dissent note suggesting that devolution to the states should be pegged at 38 percent in the first year and should be maintained at that level unless there is an agreement to deal with the fiscal problems.

With regards to Goods and Services Tax (GST), the report said: “We expect that the final GST design would have all the characteristics of a good tax system such as broad base, low rate, minimum rate differentiation, low compliance cost and reduced distortions to the economy”.
It suggested that 100 percent compensation be paid to the states in the first, second and third years, 75 percent compensation in the fourth year and 50 percent compensation in the fifth and final year after GST roll out.
“We recommend the creation of an autonomous and independent GST Compensation Fund through legislative actions in a manner that it gives reasonable comfort to States, while limiting the period of operation appropriately,” it added.
On revenue expenditure, the Commission estimates that between 2015-16 to 2019-20 it would decline from 10.8 percent to 9.6 percent of GDP primarily due to the reduction in the subsidy expenditure from 1.70 percent in 2015-16 to 1 percent in 2019-20.
With regard to the centrally sponsored schemes (CSS), the Finance Commission has identified 30 schemes for transfer to the states after taking into account higher devolution.
However, in view of the importance of the schemes and legal obligations, only 8 CSS would be delinked from support from the Centre, Jaitley said.