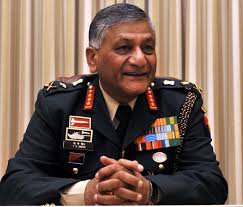 NEW DELHI : The CBI has done a complete turnaround of the stand it took a year ago on former army chief General VK Singh’s allegation that he was offered bribe for clearing a tender for military trucks.The agency now says General Singh handed them no tapes of the alleged bribe offer.
It has also filed a charge-sheet in the case, though earlier it said there was no evidence to substantiate the allegation. Newstrack24x7 has  has accessed the CBI’s charge-sheet, which denies the existence of the tapes but rests heavily on the statement of former Defence Minister AK Antony, who acknowledged that General Singh had briefed him about the alleged offer for kickbacks.The retired General is now a union minister in the BJP government.
During the CBI’s investigations last year, it was believed that the bribe offer was caught on tape and the agency had rejected them as inconclusive.But the charge-sheet says, “During investigation, VK Singh claimed to have recorded conversation. However, the same was not provided by him to the investigating agency despite efforts.”The former army chief’s lawyer Vishwajeet Singh told , “We had some tapings. It is not our fault that the CBI could not retrieve anything.”
In August last, when the previous government led by Prime Minister Manmohan Singh was in power, the CBI had said there was no proof of the charge made by General Singh in 2012 just before his term as army chief ended.
“No case is 100 per cent for chargesheet. But because the complainant here is Chief of Army staff, we decided to file it,” said the CBI’s top man, director Ranjit Sinha.General Singh had alleged that the bribe offer was made in 2010 by retired officer Tejinder Singh.  Sources say that a series of investigating officers did not want a charge-sheet against General Tejinder Singh because they felt there was not enough evidence, but the CBI director overruled them.
“Ultimately, the director’s decision prevails,” Mr Sinha said, denying that there had been any change in the stance of the CBI. General Tejinder Singh has already gone on record to say that the only reason the CBI has filed a charge-sheet is because of the change of government.