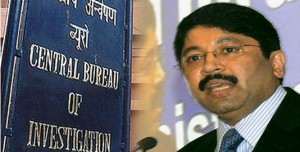 CHENNAI: Former Telecom Minister Dayanidhi Maran has hit out at the Central Bureau of Investigation or CBI, after the arrest of three people, including his close aide, in a decade-old case.
Mr Maran, who met his DMK party chief M Karunanidhi today, accused the investigating agency of framing him and trying to please the RSS or Rashtriya Swayamsevak Sangh, the ideological mentor of the ruling BJP.
“I am being singled out. The CBI is fixing me to please an RSS ideologue from Tamil Nadu,” Mr Maran alleged. He also claimed that the CBI was “torturing and forcing the arrested” men to give statements against him.
The CBI on Wednesday arrested V Gowthaman, Mr Maran’s former private secretary, in the case.Mr Maran alleged that the investigators were forcing him to testify against him.
Investigators have alleged that when Mr Maran was Telecom Minister between 2004 and 2007, he used more than 300 government-owned phone lines for Sun TV, the media network owned by his brother, Kalanithi Maran, in Tamil Nadu.

The CBI has named the former minister and officials of the state-owned telephone company BSNL in an FIR or police complaint filed in 2013. It began the investigation in 2011, four years after complaints that a virtual telephone exchange had been set up at Mr Maran’s house. The phone lines allegedly were capable of carrying huge data to facilitate faster transmission of TV news and programmes across the world.