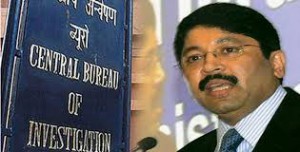 NEW DELHI : CBI is likely to file its chargesheet in Aircel Maxis case Friday after Supreme Court on Thursday rejected the plea of former Telecom Minister Dayanidhi Maran asking it to restrain the agency from moving ahead.Top CBI sources said the agency is most likely to file the charge sheet in the case today.
The decks for filing of chargesheet were cleared after Attorney General Mukul Rohatgi opposed the stand taken by CBI Director Ranjit Sinha that further probe should be carried out in the matter.In his opinion, Rohatgi had said that the available material with CBI is enough to prosecute Dayanidhi and his brother Kalanithi Maran in the Aircel Maxis case.
The sources said the matter was escalated to the office of the Attorney General as there was a difference of opinion between the views of investigation team and the CBI Director on charge sheeting Maran brothers in the case.The probe team was of the view that enough evidence was available to indicate the role of Marans while Sinha differed with its stand.
The sources said the matter remained pending with the then Attorney General Goolam Vahanvati during the tenure of the previous UPA-II government.CBI in 2011 had filed its FIR in the case alleging that the then Telecom Minister Dayanidhi Maran had used his influence to help Malayasian business tycoon T Ananda Krishnan acquire Aircel by allegedly coercing its owner Chinnakannan Sivasankaran.
It was alleged by former Aircel chief C Sivasankaran that the then Telecom Minister had favoured Malaysia-based Maxis group in the takeover of his company and in return investments were made by the company through Astro network in a company stated to be owned by the Maran family. Maran, who has been examined by CBI, has denied all the allegations levelled against him and his family members.
The agency had also sought information from the Malaysian authorities through Letters Rogatory(LR) but it did not get satisfactory details, after which the judicial requests were sent again. The reply to second LR is pending.CBI has booked Dayanidhi, his brother Kalanithi Maran, Maxis owner T Ananda Krishnan, senior executive Ralph Marshall and three companies on charges of criminal conspiracy under Indian Penal Code (IPC) and Prevention of Corruption Act.
Maran has been accused of “forcing” Chennai-based telecom promoter C Sivasankaran to sell the stake in Aircel to Malaysian firm Maxis Group in 2006 owned by Ananda Krishnan.CBI had said Malaysian authorities have been asking clear proof of criminality and their Attorney General wrote a strong letter to Indian Embassy officials in Kuala Lumpur.
The NGO, Centre for Public Interest Litigation and BJP leader Subramanian Swamy, had filed applications in the apex court alleging that Foreign Investment Promotion Board (FIPB) approval to the Aircel-Maxis deal was granted fraudulently.The agency had earlier said the overseas probe was being delayed due to the influence of the firm’s owner in Malaysia who is stated to be “powerful politically”.It had submitted that overseas probe was important to track the money trail as the funds for the deal had come through Mauritius.
The agency in July 2011 had placed a status report in the court stating that during 2004-07 when Maran was Telecom Minister, Sivasankaran was allegedly coerced to sell the stake in Aircel to Maxis Group.