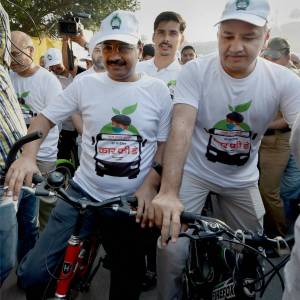 NEW DELHI: Leading from the front, Chief Minister Arvind Kejriwal on Thursday pedalled through the streets to mark the national capital’s first car-free day as he laid down the roadmap towards a pollution-free and healthy Delhi with focus on encouraging use of environment-friendly transport.
Hundreds of people including women and children buzzing with excitement joined a cycle rally along with the Chief Minister who cycled from Red Fort to Bhagwan Das Marg, a distance of about six kilometres, and appealed to Delhiites to make bicycle-riding a habit in their day-to-day routine. Transport Minister Gopal Rai said the city government will organise the next Car-Free Day in Dwarka area on November 22 and the restrictions will continue throughout the day.
Under the ‘Ab Bus Karein’ campaign, government will organise such events on the 22nd of every month. The Car-Free Day was organised on Thursday on road stretch between the historic Red Fort and India Gate from 7 AM to 12 noon.
“Today’s Car-Free Day is symbolic and in the coming days, we will have to make Delhi’s roads safer. When traffic congestion will decrease on the city’s roads, people will feel safe while riding bicycles on roads. Riding bicycle is good for health and people like me who are diabetic will get benefits from riding bicycle,” Kejriwal said.
Deputy Chief Minister Manish Sisodia, Cabinet Ministers, Chief Secretary and other officers participated in the cycle rally, aimed at encouraging people to use public transport.”Since Delhi is witnessing increasing pollution and huge congestion on roads, it is difficult for any person to ride cycle. We will have to stop rising pollution and congestion so that most people will be able to ride cycles on the city’s roads,” the CM said.
The participation in Car-Free Day was voluntary and as it was a Dussehra holiday, traffic was thin in the morning hours. Very few cars were plying on the stretch. However, those who decided not to put brakes on the vehicles were greeted with rose stems from volunteers who urged them to cooperate.
Transport Department personnel and AAP volunteers were deployed on different crossings falling on the route. They were spotted trying to prevent people with their private vehicles from entering ‘Car-Free Day’ stretch. Under slogan – ‘No pollution, no congestion – Car-Free Day only solution’, the volunteers and transport department encouraged people to use public transport during cycle rally.
The transport minister said that it is a good begining to make the people aware about the increasing pollution in national capital and to encourage them to use public transport – buses, metro etc. Under a major initiative, Kejriwal government has decided to redesign roads stretching 1,260 km under PWD in the capital to make them safe and encourage public transport.
To facilitate the people commuting through ‘Car-Free Day’ stretch, Delhi Transport Corporation (DTC) ran buses at a frequency of 2-3 minutes so that people don’t have to face problems. Besides, a section of autorickshaw drivers also offered free-ride to people wanting to commute through the stretch – from Red Fort to India Gate. During the cycle rally, most participants took a selfie with the Chief Minister and Sisodia.
On September 22, Rai had announced that Delhi government would observe ‘Car-Free Day’ on 22nd of every month.”We want to encourage people to use buses, metro, auto rickshaws and other public transport mode so that pollution level could be brought down in Delhi. Cars are one of major sources of pollution in the national capital,” the transport minister said, adding that there are around 90,000 cars registered with the transport department.
Earlier this month, Police Commissioner B S Bassi had denied permission to Delhi government to hold the programme, citing that the latter did not consult with the force before taking such a decision. However, the permission to host ‘Car-Free Day’ was later given after Lt Governor Najeeb Jung intervened in the matter.