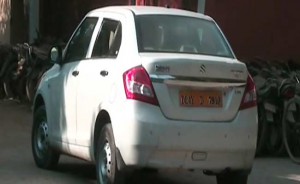 NEW DELHI : In what brings back bitter memories of Dec 2012 Nirbhaya rape case, a 25-year-old woman was raped in an Uber cab while she was returning from Gurgaon on Friday night and the accused driver threatened to sexually assault her with an iron rod and even kill her if she informed anyone about the incident.
According to the police, the cab driver accused of raping  the woman has been arrested in Mathura and the car was also recovered.
According to the sources, the driver has been identified as Shiv Kumar Yadav, who is also said to be the owner of the car with plate number as DL1Y D 7910. The car used for the crime is registered with the address of Deoli in Delhi.
Meanwhile, Delhi police has sent a notice to the regional head of Uber cab (Uber Delhi) for interrogation on Monday.
The incident poses a big question mark on the reliability of Uber cabs that boast of ensuring passengers’ safety as their highest priority and claim to hire “licensed driver-partners to provide a safe transportation option”. According to reports, there was no GPS system in the cab and no background check had been done on the driver. Police said the driver did not even have a driving licence issued by the Delhi Transport Authority. The US-based Uber cab service had started gaining popularity among users who prefer to avail its smartphone app to hire a taxi and pay through the mobile phone.
New Delhi was faced with another heinous news on Saturday as a 25-year-old woman was said to have been raped in a Uber cab that she reportedly hired from Vasant Vihar area after returning from Gurgaon.
According to the police complaint, the victim who works as an MNC employee in Gurgaon, finished her shift at 7 pm on Friday after which she attended a dinner party there with her friends.
Her friends dropped her in Vasant Vihar area from where she hired an Uber cab at around 9.30 pm and in the way, dozed off on the back seat of the cab, the police said citing the complaint.
The woman woke up to find that she was being raped while the doors were locked and the car was stopped at a secluded place somewhere between Sarai Rohilla and Indralok, said the complaint. The driver then went on to threaten that he would kill her and also sexually assault her with a rod if she shouted.
The driver then dropped her home, warning her not to inform police or anyone or he would kill her.
According to the police, the woman had managed to click the picture of the cab from her cell phone as the cab driver sped off after dropping her near her home. She added in the complaint that the cab driver dialled his own number from her cell phone. Later, she typed a text message saying that she had been raped and instead of sending it to her friend, by mistake she sent it to the driver. The driver then called her and again threatened to kill her if she informed anyone about the incident.
A case has been registered at Sarai Rohilla police station under Sections 376 (rape), 323 (voluntarily causing hurt) and 506 (criminal intimidation) of IPC.
The horrific case murkily reminds of December 2012 Nirbhaya rape case when a physiotherapy trainee was gang-raped, inhumanely assaulted with iron rods and was thrown naked off the moving bus along with her male friend. The incident had sparked fierce protests in Delhi.