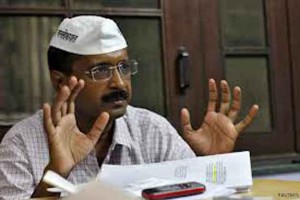 NEW DELHI: It’s a turf war that is not new to Delhi’s political landscape. But the latest clash between Chief Minister Arvind Kejriwal and Lieutenant Governor Najeeb Jung is exceptionally unseemly, with both sides charging each other – through media statements – of underhanded behavior.At the heart of the battle is IAS officer Shakuntala Gamlin, who was appointed yesterday as Acting Chief Secretary – the senior-most bureaucrat in the Delhi government. Her posting was cleared by the Lieutenant Governor. Mr Kejriwal charges that this is administrative over-reach on behalf of the Lieutenant Governor.
“Yesterday, the BJP through Delhi’s L-G is indirectly trying to run the Delhi government… such a government which has got an unprecedented mandate… the Chief Minister was ignored, the Cabinet was ignored,” Deputy Chief Minister and senior AAP leader Manish Sisodia said.
The Kejriwal government also claims that in a posting with the Power department, Ms Gamlin worked against public interest to favour power companies who Mr Kejriwal has repeatedly accused of fleecing the public with inflated prices for electricity.
The Delhi government’s charges against Ms Gamlin, listed in a media statement released yesterday, said, “She was perceived to be extremely close to electricity companies in Delhi and was lobbying for their interests within the Government.”
Mr Jung, as Lieutenant Governor, acts as the representative of the union government in the capital. In his response, he rebuts Mr Kejriwal’s accusations and says, “There was nothing on file submitted to the Lt. Governor that indicated that the government had anything against Ms. Gamlin and the Lt. Governor regrets the name of a senior officer being brought in public domain in such a manner, that too a lady officer and one belonging to the North East.”
Ms Gamlin has complained in writing to the Lieutenant Governor that she was pressured by the Delhi government to withdraw from the list of contenders for the position of Chief Secretary.
Mr Kejriwal has feuded with Mr Jung since his first term as Chief Minister in 2014; he has accused the Lieutenant Governor of acting on the orders of the union government and the ruling BJP instead of playing a non-partisan role.