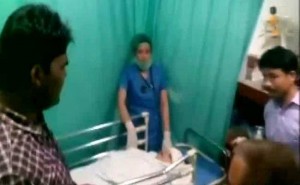 NEW DELHI: The daughter-in-law of Narender Kashyap — Bahujan Samaj Party lawmaker in Rajya Sabha — was found dead in mysterious circumstances at his home in Ghaziabad, Uttar Pradesh, today. Her family has alleged that she was being tortured and dowry demands were being made.

Himanshi Kashyap was found shot in the head, lying face down in the bathroom in a pool of blood.The weapon suspected to have been used is a licensed revolver belonging to her husband Sagar Kashyap. It was found atop a cupboard in the bedroom. The bathroom door was locked from inside but no suicide note has been found, the police said.
Seven people, including the lawmaker and his wife, were present in the house but no one has admitted to hearing the gunshot, an officer said. Sagar, a student of microbiology, had left in the morning for the medical college in Meerut.

Narendra Kashyap’s family claim they were on ground floor and Himanshi was on the first floor of the two-storied house, the police said. Around noon, one of the relatives went to call her and found the bathroom door locked. The body was found after the door was broken down.
Himanshi was declared dead on arrival at the hospital. She had sustained a single bullet wound in the head. The hospital had informed the police, said sources. The body has been sent for post-mortem.
There were two licensed weapons in the Narendra Kashyap’s house – the second one, a pistol, is registered in the name of the lawmaker, said police sources. The guns were kept in locked in an almirah.
Himanshi and Sagar Kashyap, the elder son of lawmaker, have been married for 3 years. She was the daughter of Hira Lal Kashyap, a former minister in the Mayawati government in Uttar Pradesh. The couple has an 18-month-old daughter.

Himanshi’s father has alleged her in-laws continuously tortured her and demanded cash and cars.  “Even on Tuesday when I saw her, she had a black eye,” said Heeralal Kashyap. The family was going to file a police complaint soon, he added.Denying the allegation, Narendra Kashyap said Himanshi was “like a daughter” to him.