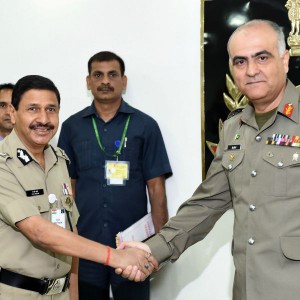 NEW DELHI: Border guards of India and Pakistan on Thursday agreed to end ceasefire violations by devising new strategies like joint patrolling in some areas along the International Border (IB) in Jammu and Kashmir as their chiefs met here against the backdrop of escalation in tensions.
On the first day of the talks between Directors General of BSF and Pakistan Rangers, the two sides decided to have a positive outlook for the future while blaming each other for initiating incidents of ceasefire violations.
The meeting between the DGs of border guards took place as per an agreement between Prime Minister Narendra Modi and his Pakistan counterpart Nawaz Sharif in Ufa in July and despite the cancellation of the NSA talks last month. Such a meeting is being held after a gap of 21 months.
During the talks today, both sides agreed that it would serve no purpose if talks hovered about the past and rather focus should be on future and devising mechanism to prevent any escalation of tension along the border. “The most significant takeaway of the talks has been that the two sides agreed that maintenance of peace and tranquillity on this border is the most important issue and this needs to be implemented on the ground,” officials said.
After the day-long talks, BSF chief DK Pathak, who led the Indian side, expressed happiness over the deliberations. “I wouldn’t say anything beyond that the talks went on in a very cordial manner and we are happy about it… Talks are meant to end the animosity and I am very happy with talks. It has progressed in a positive atmosphere,” Pathak said.
Sources said the Indian side suggested that rather than debating and contesting about the past incidents, the two sides should work on a “future” strategy to make this border peaceful and safe for the troops and civilians alike. “Pakistan agreed to this point and after some more positive talks it was mutually decided that the session should be extended by a day,” they said.
The Rangers, led by their DG (Punjab) Umar Farooq Burki, suggested initiation of joint patrolling along some mutually identified areas on this border which was agreed to by India, officials said. Sources said the Rangers “did not bring on table” the issue of activation of the UNMOGIP (UN Military Observer Group in Indian and Pakistan) for monitoring the border situation.

These much-awaited talks are happening amidst escalating tensions and continuing cases of ceasefire violations along the LoC in Jammu and Kashmir. The last talks between BSF and Rangers was held in December 2013. The preliminary talks, which were to conclude today, will now carry on for another session tomorrow after which both the sides will sign minutes of the meeting on September 12 before returning to Pakistan.
The continuation of talks ahead of the signing of minutes, known as ‘joint record of discussions’ in the diplomatic parlance, was considered as an encouraging development which is aimed to “discuss and finalise” new protocols and strategies.
According to itinerary, the Pakistani Rangers are scheduled to call on Home Minister Rajnath Singh tomorrow and later meet officials of the Pakistan High Commission. “Yes, the talks have been extended for a day and a special session will be held tomorrow to decide on protocols that will be put in place to put an end to ceasefire violations and make the Indo-Pak border tranquil,” they said.