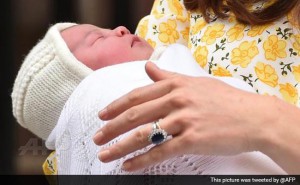 LONDON: Britain’s new princess has been named Charlotte Elizabeth Diana, Kensington Palace said on its Twitter account on Monday, a choice of names that honours the baby’s late grandmother Princess Diana and her great-grandmother Queen Elizabeth.
The daughter of Prince William and his wife Kate will be known as Her Royal Highness Princess Charlotte of Cambridge, the palace said.Princess Charlotte, born at St. Mary’s Hospital in west London on Saturday, is fourth in line to the British throne, after her grandfather Prince Charles, her father William and elder brother Prince George.
Charlotte, Diana and Elizabeth were all among the names most favoured by bookmakers for the princess, who is the fifth great-grandchild of Britain’s 89-year-old Queen Elizabeth.
The birth has provided a welcome distraction for many Britons from campaigning by political parties for Thursday’s knife-edge general election.