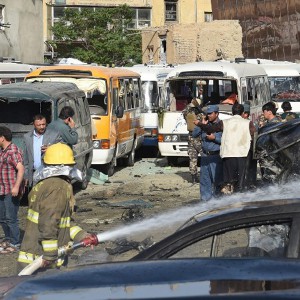 KABUL: A bomb exploded in the parking lot of Afghanistan’s Ministry of Justice on Tuesday, killing at least five people and wounding dozens as civil servants were leaving work for the day, officials said.
It was the fifth major attack in Kabul in just over two weeks and the third to target employees of the justice system, coinciding with a new offensive by Taliban insurgents across the
country.Sirens could be heard in the minutes after the blast as rescuers and police rushed to the scene.
“We only can confirm that there was an explosion in the Ministry of Justice parking area,” Ebadullah Karimi a spokesman for Kabul police chief, told Reuters.Another police official said a car packed with explosives detonated late in the afternoon but had no other information.
At least five people died in the blast, Ministry of Interior spokesman Sediq Sediqqi said by telephone.Mohammad Ismail Kawusi, a spokesman for the Ministry of Public Health, said 42 wounded people had been admitted to three hospitals in Kabul. He said the number could climb.
The huge explosion sent a plume of black smoke billowing above the city and was strong enough to rattle windows several kilometres away in Kabul’s diplomatic district.
No one immediately claimed the bombing, but the Taliban have already attacked employees of Afghanistan’s justice system this month, twice slamming car bombs into buses carrying employees of the attorney general’s office.At least four people were killed in the two previous attacks.
On Sunday, a suicide car bomber rammed a convoy of the European Union Police Mission in Afghanistan, killing two Afghan civilians and a British security contractor.Four days earlier, gunmen opened fire inside a Kabul guesthouse popular with foreigners and killed 14 people.