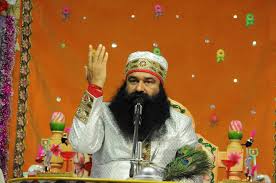 CHANDIGRAH: On the last day of campaigning for the Delhi elections, the BJP has a pledge of support from the Dera Sacha Sauda, a sect in neighbouring Haryana headed by the controversial Gurmeet Ram Rahim Singh.
“We have 20 lakh followers in Delhi, at least 10 lakh voters spread across the 70 Delhi constituencies. We have spread the message across Delhi to support BJP candidates,” said Aman Insaan, secretary of the political wing of the Dera.
The Dera Sacha Sauda has made headlines recently with its motorbike riding 47-year-old chief featuring in a film ‘MSG: Messenger of God’ that was controversially cleared for release by a tribunal, prompting members of India’s censor board to resign in protest that their red flag to film was ignored.
“Dera Sachcha Sauda extends support to BJP. Now we know why the censor board was unceremoniously packed off in the case of MSG movie,” tweeted Aam Aadmi Party leader Yogendra Yadav.

The film has been banned in Punjab, where the BJP participates in a government led by ally Akali Dal. The two parties, partners of many years, are also contesting the Delhi elections together, with at least three Akali Dal candidates contesting under the BJP symbol and one as an Akali Dal candidate.

The Akali Dal has been in the forefront of massive protests against the film, which Sikh groups allege “glorifies” the Dera leader who has several criminal cases against him. They have also alleged that Ram Rahim’s dialogues in the trailers of the film are provocative and appear to challenge Sikhs.
There have been protests in towns and cities across north India, including Delhi, over the film, which is yet to release.Sikh organisations and the Dera Sacha Sauda have been at loggerheads ever since Gurmeet Ram Rahim appeared in an attire similar to that of Guru Gobind Singh, the tenth Sikh guru, in 2007 triggering major controversy.