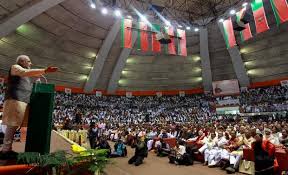 NEW DELHI: Just for the sake of power Nitish went and sat in Lalu Yadav’s lap, he says BJP President Amit Shah.In the upcoming state elections in the four states, it is important that BJP comes to power there. The J&K government has crossed all records of corruption. Locals are fed up with the two families there. Mr Shah said Working on the interests of the farmers, poor will always remain our prioroty.
The UPA-1 and UPA-2 government will be known as ‘sarkaar of ghotalas.’There are still several places where BJP needs to be strengthened.We can say today that BJP is truly a national party today.All 10 years of Congress government rule, every sector requires lots of work.We have reached out to people through various mediums including Facebook, Twitter and lakhs of activists have helped us to achieve the success.
The recent Lok Sabha polls elections showed the defeat of vote bank politics and now Congress is not even the principal opposition party. This is a big change.The government formed under the leadership of Atal Bihari Vajpayee was a coalition, but this time it has emerged as the single-largest party in the elections.
The team of Modi and Singh overcame several challenges and took the party to victory in the recent Lok Sabha polls. Kindly applaud them for their efforts for fulfilling the dream of every worker, says Shah.Shah says that Modi’s Gujarat model of governance gained people’s trust across the nation. He adds that the people of the nation voted for Modi as they wanted progress.BJP is the only party which gives opportunity to the workers even at the ground-level who can aim to be party chief. None of our formal leaders have come from political dynasties, he says.My journey started as a simple worker and I have reached this post today, Shah says.I am thankful as the party has believed me and appointed me to the post, says newly-appointed BJP chief.
Amit Shah begins his address and says that he would like to pay my respect and tribute to those who fought for country’s independence.The outgoing party president says that he is satisfied with his tenure as BJP chief.Amit Shah’s dedication to the party cannot be questioned, he says.People might have doubts regarding nomination of Amit Shah as party chief. In the history of UP, BJP won thumping victory on 71 out of 80 seats in UP while two went to a BJP ally and the credit goes to Shah, Singh says.
Shah further says that BJP and Left parties have cadre and are ideology-based while Congress lacks both.He says that the party emerged as the single largest party in the recent Lok Sabha polls under the leadership of Prime Minister Narendra Modi.While addressing the meeting, Home Minister Rajnath Singh congratulates party workers for BJP’s victory.Amit Shah unfurls Indian flag in the presence of Modi and other senior party leaders.
Political resolutions on political and economic issues will also be adopted during the national council meet.The national council meet will discuss the roadmap of the BJP-led NDA government and initiatives taken by it.
This is the first meeting of the party’s national council after BJP’s victory in the Lok Sabha polls.Top BJP leaders and more than 2,000 party leaders from across the county are participating, besides chief ministers and ministers in BJP-ruled states and Opposition leaders in states where the BJP is not in power.
Party patriarch LK Advani will also address party leaders. Union Ministers Rajnath Singh, Arun Jaitley and other leaders of the party are also taking part in the deliberations.Mr Shah had taken over as BJP chief on July 9 after Rajnath Singh resigned from the post soon after his joining PM Modi’s cabinet.
Though the BJP’s Parliamentary Board, the highest decision- making forum of the party, approved the appointment of Amit Shah, the move has to be ratified by the party’s national council, as per the party’s constitution. Mr Shah is credited with scripting BJP’s stunning victory in key state of Uttar Pradesh in Lok Sabha elections that helped BJP get an absolute majority of its own.
Addressing the meet, Home Minister Rajnath Singh said, “Some people may wonder why Amit Shah (for BJP chief’s post)?”He said that when he was looking for someone to lead the party in the 2014 Lok Sabha election in Uttar Pradesh, he zeroed in on Mr Shah. Under Mr Shah’s leadership, said Mr Singh, for the first time the BJP got 71 of the 80 Lok Sabha seats in the state.After the ratification of his appointment, Mr Shah will form his new team that will lead the party.
Sources say the new team will include a number of young leaders as the party wants to focus on strengthening the bond with voters and the common man while preparing for coming assembly