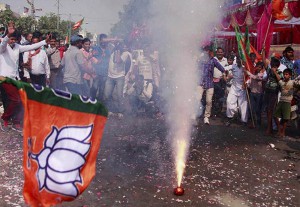 NEW DELHI : A minority Maharashtra cabinet will be sworn-in on October 30 – if talks with the Shiv Sena about the renewal of the alliance is not wrapped up by then, sources in the BJP have told NDTV. The ceremony is likely to be held at the Wankhade Stadium and Prime Minister Narendra Modi may attend it, they added.
The talks with Shiv Sena can continue after the swearing-in of a mini cabinet, the sources said. Though the BJP emerged as the single largest party in the recently concluded Maharashtra elections, it is still 22 seats short of a majority. But the party is not short of options. While Shiv Sena is considered the “natural choice” for a partnership, the NCP has already offered the BJP outside support, which the party has not rejected.
So, even while talks about portfolio sharing with the Shiv Sena are on, the BJP can push ahead with the government formation. Earlier today, admitting that the talks are on track, senior Maharashtra BJP leader Vinod Tawde said the BJP will hold the election of the leader of the legislature party – who becomes the chief minister – on October 28.
“We will elect a new legislature party leader at the meeting, in which (Union minister) Rajnath Singh, (state party in-charge) JP Nadda, Om Mathur and Rajeev Rudy will be present,” Mr Tawde said.
The BJP had averted a row over the chief minister’s post – both Union Minister Nitin Gadkari and state party chief Devendra Fadnavis appeared to be in the running – with a Diwali Milan between the two. Later, Mr Gadkari underscored that he was not in the race and did not wish to return to state politics. But party sources had indicated that before naming the chief minister, the BJP wished to settle the alliance question.
“The BJP wants to bring Shiv Sena into the alliance and form the government. If we come together in our minds then we can discuss portfolios etc,” Mr Tawade said. Talks, he added, were in progress in Delhi too.