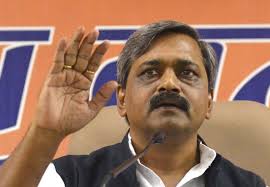 NEW DELHI : As new permutations and combinations are building up to form government in the nation’s capital, the BJP is set to hold a Central Election Committee meet on September 9 which may likely to put an end to political deadlock in Delhi, as per reports on Sunday.
The BJP may also discuss about the candidates for Haryana elections in the meet. A day after the Lieutenant Governor Najeeb Jung recommended that the single largest party in Delhi Assembly should be given a chance to come to power to break the logjam, Home Minister Rajnath Singh had said that a call will be taken once formal proposal is received from the Lt Governor even as he dismissed any attempt to form government by poaching MLAs of other parties. Meanwhile, the BJP Delhi chief Satish Upadhyay today said that he had a meeting with Singh, but did not discuss government formation in Delhi with him.

He also said that the party will wait for an official invite from LG. Rubbishing reports about the BJP indulging in horse-trading, Upadhyay said that his party will not take any step which will be unconstitutional. Yesterday, the Aam Aadmi Party met President Pranab Mukherjee demanding fresh elections in the capital.
The objected to the letter that lieutenant governor Najeeb Jung reportedly wrote to the President on Thursday, seeking permission to invite BJP to form the government in Delhi. “We met the President and told him that our party (AAP) wants elections. We are not in a position to form government and we will not support anyone. Congress has also made it clear that they will not support anyone. In such a scenario, how can BJP form government when they don’t have the required numbers”? Kejriwal told reporters.
Rumours are doing the rounds about possible horse-trading as only 22 AAP MLAs had gone to meet the president, the rest 5 MLAs were absent. Meanwhile, possibility of secret ballot is also being considered wherein the chief minister will be appointed through voting by elected legislatures in Delhi Assembly. However, nothing has yet been confirmed. Related Videos Secret ballot to end political deadlock in Delhi? The BJP, along with its ally Akali Dal’s one MLA, has 29 MLAs in the Assembly and it will require support of five more legislators to prove majority in the House.
BJP had won 31 seats in the 70-member Assembly but the number of BJP MLAs came down to 28 as three party legislators Harsh Vardhan, Ramesh Bidhuri and Pervesh Verma had resigned from the Assembly after they were elected to Lok Sabha.​