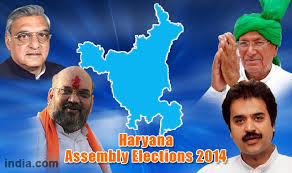 CHANDIGRAH: As the results poured in, the outgoing Chief Minister Bhupinder Hooda accepted defeat of the Congress party in the elections. In its best performance in nearly three decades, BJP created a record getting majority on its own in the 90-member Haryana Assembly winning 47 seats.
The saffron party’s previous best performance was in 1987 when it won 16 of the 20 seats it had contested.This time, riding on Modi wave, BJP foiled the efforts of Bhupinder Singh Hooda’s Congress government to retain power for the third successive time.
The saffron party had won only four seats in the previous Assembly election in 2009.Though Hooda was confident of getting the third term, Congress’ performance had declined in the 2009 Assembly poll as well compared to its performance in the 2005 election.Congress had won 40 of the 90 seats it contested in 2009.
In the 2004 Assembly election, the party had done much better winning 67 of the 90 seats it contested.
Even in the previous assembly poll five years ago, Congress had fallen short of majority with only 40 seats in the 90-member House (as against 46 seats required for simple majority). Om Parkash Chautala-led INLD finished second with 31 seats.
The remaining 29 seats were shared by Haryana Janhit Congress-BL six, BJP four, SAD and BSP one each and Independents seven.
But, Hooda managed to form the government after five Haryana Janhit Congress (BL) MLAs deserted their party and merged with Congress which also got support of seven Independents and a lone BSP member.
Unlike in recent past when the fight had mainly been between Congress and Indian National Lok Dal (INLD), this time BJP, buoyed by its success in Lok Sabha elections, emerged as the main challenger to Congress.