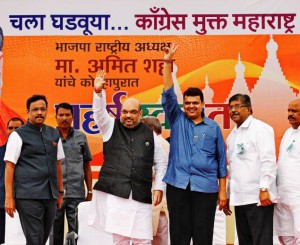 NEW DELHI: Squabbling over seat sharing showed no signs of resolution on Sunday with the BJP saying there was “nothing new” in Shiv Sena’s final offer to give it 119 seats for upcoming Maharashtra assembly polls and hoped it can be mutually settled.Hours after Uddhav Thackeray’s tough talk in Mumbai on seat sharing and that Sena cannot give beyond 119 seats, BJP told its old alliance partner that it was the duty of both the parties to continue the tie-up and sort out issues instead of going through the media, in remarks directed at the Sena chief.The party also termed Thackeray’s final offer to it as being “nothing new” as the BJP has been contesting on 119 seats eversince the alliance came into being.Reacting cautiously, leaders of opposition in Maharashtra assembly and legislative council Eknath Khadse and Vinod Tawde said here the party wants Sena to renegotiate on seats they never won in the last 25 years, so that they are not given to the NCP-Congress alliance on a platter in the upcoming election.

“There is nothing new in the latest Shiv Sena offer as BJP has been contesting 119 seats ever since the alliance came into being. We want the alliance to continue. It is the duty of both Shiv Sena and BJP to maintain the alliance.“We have 25 year-old ties and seat-sharing issue can be sorted out mutually through face to face talks and not through media (TV),” Tawde told reporters in a hurriedly convened news conference.Khadse said, “Shiv Sena has been losing on 35 seats while we have been losing on 19, if these were to be reallocated then we would all benefit instead of these seats going automatically to Congress-NCP alliance.”

“Many such seats had been lost by narrow margin in the previous elections. That was the thought and mindset behind the proposal for the 135 seats,” he said.However, the BJP leaders also said they were ready to accept 130 seats — five seats down from its earlier demand. The Shiv Sena on Sunday made it clear that it won’t make any more concession for BJP, offering to cede it only 119 out of the total 288 seats in Maharashtra assembly for next month’s polls, and said this was “the final attempt” to break the logjam over seat sharing.

Thackeray also reminded Prime Minister Narendra Modi that late Sena supremo Bal Thackeray had backed him in the aftermath of the 2002 Gujarat riots.

Reacting to this, Khadse said during their meeting with Sena leaders on Saturday, BJP has also raised strong objection to certain public remarks against Modi.

“We have expressed our anger on remarks made against the Prime Minister. We will not tolerate any attack on Modi who is our leader,” Khadse said. He also said it is the time for Shiv Sena to make “some sacrifices” as BJP has been making “sacrifices” in the past for winning the elections and saving the alliance.

He cited the example of BJP giving six more Lok Sabha seats to Shiv Sena in the recent elections.

“This has resulted in BJP contesting on 26 seats, down from 32 it contested in the past.”Though there is pressure from the cadres from the state to go it alone in the polls, the BJP wants to continue with the alliace, Khadse said.

Asked if time was running out for further negotiations, Tawde said we can talk during 24 to 48 hours.

Maharashtra core group of BJP was huddled together at the party headquarters since Sunday morning holding discussions on the issue of seat sharing with Shiv Sena. Party chief Amit Shah was also present at the meeting.

The 25-year-old alliance between Shiv Sena and BJP is on the rocks over the issue of seat sharing with BJP seeking more seats and Sena in no mood to concede.