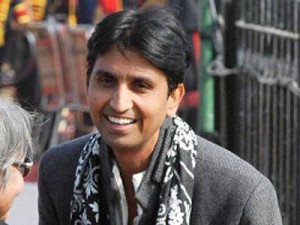 NEW DELHI : Aam Aadmi Party (AAP) leader Kumar Vishwas has made serious allegations against the Bharatiya Janata Party saying that a BJP MP asked him to join the party and help it win Delhi elections. Vishwas, who lost the parliamentary elections from Amethi constituency made the startling claims while speaking to a leading newspaper.
The AAP leader, considered to be a close confidante of his party convenor Arvind Kejriwal said that a BJP MP had met him on May 19 at his residence and persuaded him to join the party. “The MP claimed he was meeting me at the behest of top BJP leaders and offered him the chief minister’s post,” Vishwas said.
While speaking to ANI, Vishwas questioned BJP’s reluctance to contest polls in Delhi, while it is ready for polls in Haryana and Maharashtra. “That newly-elected BJP MP also insisted that I work for building our nation, but I told them that you should work for nation building as you have the mandate. Our best wishes are with you,” Kumar told ANI. Surprisingly, the activist-turned politician refused to name the BJP politician citing personal relations.
Vishwas also said that a long time had passed since this conversation and he did not want to encourage speculation by divulging whether the MP was elected once or twice. He also added that a conversation with a friend should be kept out of the political ambit. Meanwhile, the BJP has reacted strongly to Vishwas’ claims. Party MP Satish Upadhyay said, it seems Kejriwal has written a new script for Vishwas and dared him to reveal the name of the BJP leader who approached him. Congress has also ridiculed Vishwas assertions and said AAP leaders are making such allegations to stay politically relevant. Party leader Barkha Shukla accused AAP members of being greedy for power.
Coming to defence of his party colleague, AAP leader Somnath Bharti said whatever Vishwas is saying is true and accused the BJP of betraying the people with false promises. Delhi has been under the President’s rule since February 17 this year after AAP chief Arvind Kejriwal resigned as the Chief Minister in protest against the Lieutenant Governor’s refusal to allow the introduction of the ‘Janlokpal Bill’ in the Assembly. The Supreme Court had earlier this month asked the Centre to take a decision on holding the Delhi Assembly elections following a petition filed by the Aam Aadmi Party asking for the dissolution of the Assembly and fresh polls.