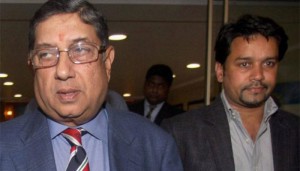 NEW DELHI: A day after the International Cricket Council (ICC) letter to Board of Control for Cricket in India (BCCI) about Anurag Thakur socializing with an alleged bookie was made public, the BJP MP lashed out at N Srinivasan in a public letter and asked BCCI to issue a list of suspected bookies.
In the letter he shared on social media site Twitter, Thakur said that he knew Karan Gilhotra, as he was active in the political and cricketing activities in Punjab.
“I have earlier been the Joint Secretary of the BCCI under your President-ship and I am now Secretary, BCCI. I only wish that you had shared the list of unverified suspected bookies with me and other colleagues, so that we could identify such persons and keep away from them. I have known this person, who has been active in the political and cricketing activities in Punjab and adjacent States. I had no knowledge or any clue about his activities as a suspected bookie,” the letter said.
A fresh controversy hit the BCCI when pictures of Anurag socializing with Karan Gilhotra emerged on Sunday.The pictures showed Thakur cutting a cake, Gilhotra feeding Thakur a piece of cake and Thakur returning the favour.
In his letter, Anurag further wrote, “It is curious that intimation about my having known this ‘suspected bookie’ was brought to the ICC notice by your friend Mr. Neeraj Gunde. Mr. Neeraj Gunde incidentally is circulating to the media in Delhi the details of documents against your critics in the BCCI. He operates on your behalf.
A procured complaint and an ICC advisory based on ‘unverified information’ was issued at your behest on the eve of the BCCI Working Committee meeting. It was intended to be a counter offensive on your behalf, since you have not reconciled with my election as Secretary, BCCI.
Taking a jab at Srini’s son-in-law Gurunath Meiyappan, Anurag said that the ICC chairman should share a list of suspected bookies even with his family members.
“I would request at least now share with me or other colleagues in BCCI the list of suspected bookies in India, so that we may keep away from them. You may also share this information with your family members, whose involvement in betting has been proved. Since the ICC advisory to me had been made in public, I would be making this letter to you public,” Anurag signed off.
As per a news report in DNA, ICC CEO Dave Richardson sent a mail to BCCI president Jagmohan Dalmiya notifying him about the BJP MP’s association with Gilhotra, who is on their Anti-Corruption and Security Unit (ACSU) database.
As per the ICC mail, their ACSU had unverified information in 2014 that Gilhotra was attempting to get friendly with IPL players and support staff.Ravi Sawani, director of the BCCI ACSU, had written to all IPL team managers back then, asking them to ensure Gilhotra was not given access to players and support staff.
As per a picture released by a news website, Thakur and Gilhotra are seen together at a cake cutting ceremony. However, it would be unfair at the moment to draw any conclusion regarding the nature of relationship between the two.
“I can only laugh at this. I have already sent a notice to the ICC for mentioning my name in their database. I have never received any communication from the ICC, the BCCI or any IPL franchise in this regard. I am a cricket lover. I am a social person and I love to meet and interact with people.
“I know Anurag for more than 10 years. The pictures being circulated in the media were clicked at my wedding anniversary party in Chandigarh last month. Do you think Anurag, a sitting MP of the BJP, will be associated with a person involved in illegal activities? Just because I know people and party with them, it doesn’t mean I am involved in any wrongdoing,” Gilhotra told.