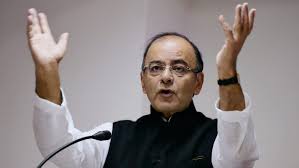 NEW DELHI: Bharatiya Janata Party (BJP) has won the first round of ideological challenge on nationalism by forcing people raising anti-India slogans to chant Jai Hind, Union Minister Arun Jaitley on Saturday said.
Jaitley’s comments amid a charged debate over patriotism and chanting of “Bharat Mata Ki Jai”.The senior BJp leader’s statement comes against the backdrop of AIMIM leader Asaduddin Owaisi’s refusal to chant “Bharat Mata ki Jai” saying he is not obliged to do so by Constitution.
Prior to Owaisi’s statement that stoked a debate, RSS chief Mohan Bhagwat had said the youth should be taught patriotic
slogans.Raising the pitch on the issue, Mr Jaitley also took a swipe at Congress vice president Rahul Gandhi who had visited JNU following an event where anti-India slogans had been raised and said, “Some people are questioning the nationalism of Savarkar, who inspired lakhs and crores of countrymen. These very people are attending programmes of those who talk of breaking up India.”

“This is a huge challenge for us. This is a big ideological challenge. We should consider this an ideological battle and I feel we have won its first round. Now people who were raising slogans against the country have started saying they will chant ‘Jai Hind’, if not ‘Bharat Mata ki jai’.
“At least they have been said something to convey their allegiance to the country. This was your ideological victory that you forced them to say this,” he said while addressing the Executive Committee meeting of Delhi BJP.
Mr Jaitley said while BJP’s ideology is inspired by nationalism, “it is a strange situation where talking about breaking the country is called freedom of expression. The law or Constitution does not permit this anywhere. And it is happening in the national capital.”

Asking party workers in Delhi to reach out to SCs/STs and women, Mr Jaitley said Government will in the next few days launch the ‘Stand Up India’ scheme where every bank branch will give Rs. one crore loans to SC/STs and women to start big ventures and become big entrepreneurs.
In a scathing critique of Congress, the Finance Minister said it was shrinking throughout India and the voters will turn Prime Minister Narendra Modi’s slogan of ‘Congress-free’ India into a reality.

“Modiji once called for a Congress-free India. Congress has already gone out of Arunachal Pradesh. It can lose its government in Uttarakhand any day. In upcoming Kerala and Assam elections there are clear signals that it will wind up. Indian voters will convert Modiji’s slogan for Congress-free India into reality. We are headed in that direction,” Mr Jaitley said.
Asking the BJP to occupy political space up for grabs in Delhi and across India, Mr Jaitley said Congress had lost its ground and BJP is now emerging as the centre-stage party.
“The Congress’ aim these days is to be a tail-end of any political alliance. It is like the 10th or 11th batsman in a cricket match. In Bihar they allied with Lalu Prasad and Nitish Kumar. In Tamil Nadu, they are seeking seats from DMK. Congress is the new tailender of every alliance. This is the state to which Congress leadership has driven the party to.”
Slamming the Congress for parliamentary disruptions, Mr Jaitley described its politics as that of a ‘fringe’ party.”Mainstream political parties practise mainstream politics. But Congress practices a politics of fringe…Only fringe political parties work to stall the progress of country,” he said while pointing out the work being stalled in Parliament due to disruptions.
Attacking the AAP dispensation, he said it is a government of “confrontations rather than constructive work” and added people who came out in favour of those who wanted to break India are today wanting to crush opposition and democracy in Delhi.

“They were not bothered about throttling the voice of democracy and freedom of expression. There cannot be a bigger attack on democracy or independence when someone is targeted because he conveyed his critical views through newspaper,” he said referring to controversy around Vijender Gupta, one of the BJP legislators in the Delhi Assembly.
Mr Jaitley said the disillusionment against AAP government is rising and BJP should stand to gain from it and encash it. He also said that the “politics of theatrics” can be done only within limits.

“When questions are raised, then only to say that we fought so many battles but could not do work. All sections have started dissociating one after the other. And it is difficult to regain their support. Congress is not in a position to gain that and that is why that space is available to BJP in Delhi,” he said.