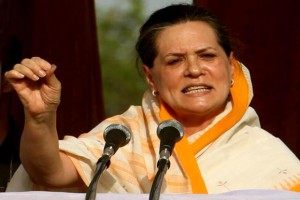 NAGPUR: Congress president Sonia Gandhi slammed the BJP on Monday, saying that they had undermined democracy in Uttarrakhand and Arunachal Pradesh.”This is an attack on democracy,” she said.
Speaking at Dr BR Ambedkar’s 125th Birth Anniversary celebrations here, the Congress president added, “Those who targeted him in his early years, are today praising him for petty political gains. Babasaheb Ambedkar fought against those forces who would discriminate against sections of our society.
The people who would sing praises for Babasaheb Ambedkar are they same people who cut budgets for the upliftment of OBCs.”
Taking on PM Narendra Modi, Sonia said, “BJP don’t go by their words. They will disturb reservations. Babasaheb would have fought these forces. PM Modi and his team want to kill the ideology of Babasaheb Ambedkar and everything he stood for.”
At the same time, she pointed out, “It was the Congress which requested him to carry out the big task of drafting the Constitution. I am proud to be part of this historic celebration of the life & legacy of Dr BR Ambedkar.”
Also speaking on the occassion, Congress vice president Rahul Gandhi said, “They attack me because they know I will never surrender before the ideology of RSS and Manu.”

“Today there is no university in India where there is no RSS person. Their aim is that you don’t have access to better education,” he added.