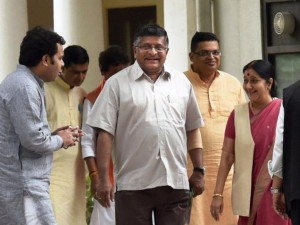 NEW DELHI: Bracing for the opposition onslaught in Parliament, government and the ruling BJP on Sunday decided to aggressively counter the attack on its leaders like Sushma Swaraj, Vasundhara Raje and Shivraj Singh Chouhan and rake up controversies related to Congress leaders.
With Parliament convening on Tuesday for Monsoon session, BJP chief Amit Shah held strategy meetings with various party colleagues, including union ministers Arun Jaitley, Swaraj, Smriti Irani, Ravi Shankar Prasad and Piyush Goyal as well as party spokespersons during which Raje, the Chief Minister of Rajasthan, was also present.
Subsequently, Shah, along with Jaitley and other senior leaders like Rajnath Singh and Venkaiah Naidu met Prime Minister Narendra Modi to finetune the strategy.Chouhan also landed in Delhi later in the evening to participate in the confabulations.
Making it evident that there will be no resignations, the party discussed how to counter the opposition attack in Parliament and harmonising of the response of the government and the party on these issues, sources said.
Congress has threatened to disrupt Parliament if its demands for ouster of Raje, External Affairs Minister Swaraj and Madhya Pradesh Chief Minister Chouhan are not acceded to.
Raje is under attack for her links with former IPL Chairman Lalit Modi who is facing ED probe. Swaraj is also accused of helping Lalit Modi. Chouhan is under the opposition fire in Vyapam scam.

BJP does not want to be seen on the defensive on the controversial issues plaguing the party for the last few months, the sources said.”We will aggressively and effectively counter the disinformation campaign of Congress,” said party media cell in-charge Shrikant Sharma, who was present in Shah’s meeting.
“As far as Lalit Modi controversy is concerned, Congress is totally confused. On one hand, they are seeking resignation of our leaders on the basis of Lalit Modi’s comments, but has no answer to his charges against Priyanka Gandhi, her husband Robert Vadra and an alleged deal Sonia Gandhi’s sister. We will seek their answers on these,” he said.
A BJP leader said the party also decided to highlight howjudiciary had earlier refused to take cognizance of Congress leader Digvijaya Singh’s attempts to drag Chouhan in the Vyapam scam.The party believes that there was no wrongdoing on part of Vasundhara or her son Dushyant Singh in dealings with Lalit Modi.
Among the party’s media faces who met Shah were MJ Akbar, Shrikant Sharma and Sambit Patra.Besides pressing for removal of Swaraj, opposition has indicated that it will also target HRD Minister Smriti Irani, who is facing charges related to an educational certificate.
Chhattisgarh Chief Minister Raman Singh may also be targeted in connection with a rice scam.The ruling BJP, on its part, is likely to train its guns on Himachal Pradesh Chief Minister Virbhadra Singh of Congress, who is embroiled in a disproportionate assets case. In an indication of the challenges his government is likely to face in Parliament, Prime Minister Narendra Modi has convened the maiden meeting of all NDA constituents tomorrow to deliberate the strategy to counter the opposition.
Before meeting the allies at his residence, Modi may also attend two separate all-party meetings called by Parliamentary Affairs Minister M Venkaiah Naidu and Lok Sabha Speaker Sumitra Mahajan to discuss ways to ensure a smooth session.
Sensing the opposition heat awaiting his government in Parliament, Modi had on Friday acknowledged that there will be a ‘muqabla’ (contest).While the BJP-led NDA commands an absolute majority in Lok Sabha, it lacks numbers in the Upper House where Congress is the largest party and holds key to the passage of the crucial legislations, including GST and land bill.
Senior NDA ministers had on Thursday held a meeting to chalk out the strategy for pushing the government’s legislative business in view of the Opposition parties closing ranks on various issues.
The government has finalised 35 items of business for the monsoon session, which included nine bills pending in Rajya Sabha and four pending in Lok Sabha, besides introduction of 11 new bills.