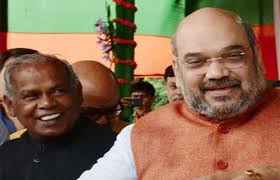 EW DELHI: The Bharatiya Janata Party (BJP) has apparently managed to placate former chief minister Jitan Ram Manjhi, who on Monday confirmed that “everything is sorted”.
The differences between Manjhi and the BJP over the seat-sharing issue seem to have been ironed out as a Hindustani Avam Morcha (secular) leader claimed that the party is being offered 20 seats by the saffron party.“There is no confusion, everything is sorted,” the ANI quoted Jitan Ram Manjhi while he was on his way to meet Amit Shah at his residence where the Bihar BJP Core Group meeting was held.
In what suggested that the factions had reached a ‘sweet’ deal on seat-sharing, both Manjhi and Shah were seen sharing sweets after the meeting, as per an ANI visual.
A final announcement on the seat sharing arrangement between BJP and its three allies– Ram Vilas Paswan’ LJP, Upendra Kushwaha-led RLSP and Manjhi’s HAM(S) – is expected later today at the press conference of the BJP to be held at 1 pm.
Amit Shah, Bhupendra Yadav, Ananth Kumar, Jitan Manjhi, Narendra Singh, Shakuni Chaudhari were present at the meeting held at Shah’s residence.
BJP president Amit Shah reportedly cancelled his Mysore visit to resolve the crisis after Manjhi’s associates threatened to reconsider continuing in the alliance if a “respectable” offer was not made.

Earlier, Manjhi was said to be miffed after he was offered 13-15 seats by the BJP and sought to draw a parity with Paswan’s LJP, which was tipped to get around 40 seats.The entire issue was solved after a hectic day of talks on Sunday as negotiations continued till late night.
A seat sharing agreement was said to have been reached at a meeting BJP’s incharge for Bihar assembly elections and Union minister Ananth Kumar and party general secretary incharge of the state Bhupendra Yadav had with Hindustani Avam Morcha (secular) leader Manjhi at Bihar Niwas.
After the late night confabulation, a HAM(S) leader claimed under the arrangement worked out at the meeting the party would get to field about 20 candidates, while five others would contest on BJP’s symbol.
Meanwhile, BJP’s Central Election Committee is likely to meet on Tuesday to decide on its candidates for the elections.The five-phase polling for the 243-member assembly begins from October 12 and concludes on November 5.