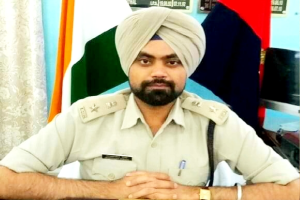 PATNA: A senior Indian Police Service (IPS) official, Manavjeet Singh Dhillon, has landed in a controversy after comparing the Popular Front of India (PFI), an extremist Islamic organisation, with Rashtriya Swayamsevak Sangh (RSS). BJP leaders have sought immediate sacking of the official currently posted as the senior superintendent of police in Patna.
Dhillion, a 2009 batch IPS officer, compared the extremist Islamic organisation to the RSS while addressing the media shortly after the police claimed to have busted a “potential terror module indulging in anti-India activities” by arresting two people, including a retired Jharkhand police officer, with alleged links to PFI. “The arrested accused were mobilising the people from madarsas and driving them towards fanaticism. Their modus operandi was almost similar to that of the RSS. Just as the RSS has been organising training camps, they have been training the youths and brainwashing them through their propaganda,” the SSP told the media today.
.
“Like there are shakhas and training for using lathis by the RSS, similarly under the guise of physical education PFI were calling the youth to their center and promoting their ideology and attempting to brainwash them,” said Manavjeet Singh Dhillon, the Senior Superintendent of Police, Patna. Shortly after, angry comments came from BJP leaders condemning the statement. Sources said Chief Minister Nitish Kumar has asked the top police officers to seek an explanation from Mr Dhillon within the next 48 hours.
“Patna SSP should immediately withdraw such statement and apologize for it,” read a Hindi tweet from Sushil Modi, Rajya Sabha member and former Deputy Chief Minister of Bihar. “It shows the SSP has lost his mental balance… how can you compare a nationalist organisation like RSS with PFI?” said party legislator Haribhushan Thakur Bachaul. Jeetan Ram Manjhi ‘s Hindustan Awam Morcha, defended the officer.
Dhillon’s remarks have triggered strong protests from the BJP which sought for his immediate sacking. “The SSP has become mentally bankrupt and crossed the limit of decency through his remarks. If he can’t differentiate between the RSS which an organization engaged in nation building and a terrorist organisation, then he doesn’t deserve to continue on his post even for a second,” BJP spokesperson Manoj Sharma said adding his further continuance could create the law and order problem across the state. He asked the chief minister to take cognizance of this remark and sack him without any further delay.
Another BJP spokesperson and party’s BJP OBC Morcha’s National General Secretary, Nikhil Anand, termed the statement as “shameful and highly condemnable”. Anand asked the official to apologise for his act. Meanwhile, the additional director general of police JS Gangwar is learnt to have served show-cause notice to the Patna SSP.