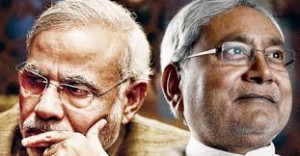 NEW DELHI: Counting of votes in the high-stakes close-to-call Bihar assembly elections, billed as a hot battle between Prime Minister Narendra Modi and Chief Minister Nitish Kumar, will take place on Sunday.
The counting for the 243 seats of the assembly will begin at 8 am and the verdict for a majority of seats is expected by the early afternoon.
Most of the exit polls have predicted a close contest between the BJP-led NDA and the grand alliance of JD(U)-RJD- Congress with a slight edge to the Chief Minister Nitish Kumar-led grouping. However, two of them, including Today’s Chanakya and the one done by Hansa for NDTV, have given a clear majority to the NDA.

While Kumar is not in the fray, among the prominent faces in the battle are mahadalit leader Jitan Ram Manjhi, who has fought from two seats, and two sons of RJD chief Lalu Prasad have also made their electoral debut.
The five-phased elections, which started on October 12 and ended on November 5, saw the lead campaigners from both the sides trading bitter accusations that at times turned personal.
Over a dozen FIRs were lodged by the poll authorities in Bihar against the top leaders of the two alliances relating to their alleged hate speeches. The accused included BJP chief Amit Shah, RJD supremo Lalu Prasad and JD(U) president Sharad Yadav. Modi had led the NDA charge by holding over 30 rallies while Shah held 85-odd public meetings.
A win for the saffron alliance will help BJP shake off the opposition attack on it over the “climate of intolerance” and embolden it to push its agenda ahead of the Winter Session of Parliament.

However, a loss for it will reinvigorate the opposition ranks and help Kumar acquire a key role in national politics after he suffered a big setback in the Lok Sabha polls.
A defeat for the grand alliance will deliver a body blow to the politics of Kumar and Prasad from which it may take a long time for them to recover.
As much as 56.80 %, the highest in assembly election in the state’s history, of the 6.68 crore voters have exercised their franchise.