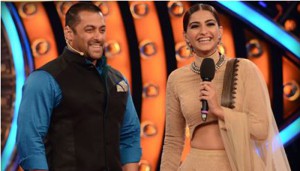 MUMBAI: One of the most loved and followed reality shows of Television, ‘Bigg Boss’ season 9 has broken all records in terms of twists and entertainment.
The Sunday episode of the show hosted by striking Salman Khan was studded with gorgeous Sonam Kapoor.Fashionista Sonam, who is gearing up to share the screen with superstar Salman in ‘Prem Ratan Dhan Payo’ came to the reality show to promote her movie releasing on Diwali.
The show has left no stone unturned to stand out and give the best to the audiences. Sunday episode had a live video chat between the contestants and media. Also, adding to the panel, Bollywood actor Ayushmann Khurrana too interacted with ‘Bigg Boss’ participants. Advising Rimi Sen to be more active on the show, Ayushmann was candid with the inmates.
Media questioned the contestants in the live video chat, garnering the views of participants, absolutely unaltered. Asking the contestants to discover their individuality, Ayushmann motivated them.
Well, audiences will surely be mighty impressed with the unique pattern of the new season.Inmate Mandana Karimi hogged the spotlight and fetched appreciation from the panel on the show.

The episode was packed with fun and humor, well Salman’s crazy streak never fails to impress one and all. The never-seen-before candid interactions of the inmates with outside world, live, has surely attracted many towards the progression of the 9th season of ‘Bigg Boss’.
The episode had a wave of glee and claps post Yuvika Chaudhary-Vikas Bhalla and Digangana Suryavanshi- Roopal Tyagi were saved from elimination. Voted the least in the house, contestant Ankit Gera was the first to be eliminated from the 9th season of ‘Bigg Boss’.