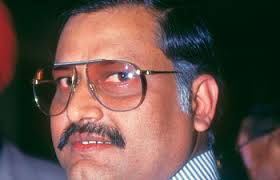 NEW DELHI : Some attempts were allegedly made by a senior bureaucrat to stop the arrest of former Union Minister Mantang Sinh who was picked up by the CBI in connection with the multi-crore Saradha scam, agency sources claimed on Sunday.
While CBI was officially mum on the alleged pressure, sources in the agency claimed that phone calls were being received from a senior bureaucrat to the top brass of the agency for preventing the arrest of Sinh, who was Minister of State in Home in P V Narasimha Rao’s cabinet. Sinh was arrested yesterday.
Sinh, during his custody, had made attempts to allegedly browbeat the CBI sleuths with his “contacts” and even made calls to the senior bureaucrat to make a last-ditch attempt to prevent himself from getting arrested, the sources said.
The CBI sources alleged that Sinh was in “deep nexus” with “higher echelons of bureaucracy” and had allegedly been using this influence to get his work done.CBI officials claimed that this was not the first time that influence was being exerted by Sinh to get “favours” from the CBI.
On earlier occasions, the CBI had been pressurised not to file a charge sheet against him in previous cases filed by the agency which was resisted by the former CBI Director Ranjit Sinha.
Sinh, who was arrested by the Special Investigation Team of CBI here, was charged with criminal conspiracy, cheating and misappropriation of funds related to Saradha Realty, one of the companies of the group which is being probed by the agency, CBI sources said.
The former Congress MP had allegedly been using the name of the senior bureaucrat to get deals settled?and getting work done, they said.They said now his questioning may throw some links with?the senior bureaucrat.
CBI has already charge sheeted Sinh in a loan default?case in February 2013 where he allegedly did not repay Rs 67 crore loan taken from Canara Bank for floating M-3 Channel.
The sources said several other cases are also pending against him.Sinh is the first former Union Minister to be arrested by the agency in connection with the case.The sources said he was called to the CBI headquarters here where he was grilled by the SIT for over five hours before being arrested.
They said the arrest became imminent as he was not cooperating with the investigation team prompting the agency to take him into custody.