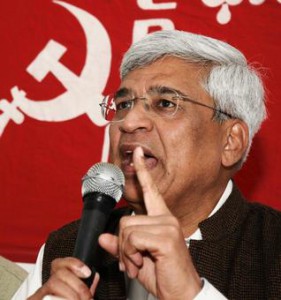 NEW DELHI: On Tuesday, the Communist Party of India (Marxist) would kick start the process of electing a new general secretary by holding its 21st party congress in Andhra Pradesh’s Visakhapatnam.

Prakash Karat, the party’s general secretary for the past decade, would step down and new leadership would take charge.Ironically, much like Visakhapatnam that bore the brunt of cyclonic storm Hud Hud in October last year, CPI(M) too has been hit by a political storm after it lost its “Red Fort” in Bengal four years ago.
So, can the party rebuild itself much like the city? “Yes, of course, we will. Not just in Bengal but all over India,” says Sitaram Yechury, the man tipped to succeed Mr Karat. But that’s a question he isn’t ready to answer.
“Who becomes the next general secretary is something only the new Central Committee can decide. You are speaking to me as a member of the outgoing Central Committee. It is impossible for me to comment on this and I think there is no need to speculate on this question,” replied Mr Yechury on being asked if we were speaking to the next general secretary.
But the senior leader did share with a TV Channel the challenges before the party and what it needs to debate in the week-long deliberations. From a peak of 60 seats in 2004’s Lok Sabha, the Left is reduced to nine seats in 2014. In Bengal, the BJP is vying for the main opposition space and the party hasn’t been able to expand beyond Bengal, Kerala and Tripura.
“Yes, is true when it comes to fighting for people’s issues such as wages or other economic issue, people swear by the red flag but the same people when it comes to voting, they are swayed by social milieu like caste,” said Mr Yechury, adding, “Parliament’s numbers in themselves is not the whole story. What is required is to strengthen our capacity to intervene through public mobilizations, through people’s struggles. It’s only when these struggles grow, our numbers in Parliament will grow.”
Mr Yechury admits that the party has failed to articulate its position that very often the “oppressed classes” also belong to the traditionally “oppressed castes.””We accept and understand the complexities. The articulation between caste and class is a profound issue in India’s politics. We have not been able to articulate better that our stand towards marginal castes and classes is the same,” said Mr Yechury.
Another issue that the party will debate is why the Left has not been able to reach out to the youth. “Today, increasingly in the last decades or so, the brightest of the Indian students are going to the private institutions. And in the private colleges, there are no students’ union, no student politics. So by a structural change, you are doing a great disservice to the nation by keeping the youngest minds in the country, the most active and the most important minds outside the ambit of politics. This is serious and we need to grapple with this in the party congress,” said Mr Yechury.
His senior colleague and outgoing Prakash Karat agrees with him. “Privatization of education is one reason why there is a decline in student politics,” said Mr Karat, someone who’s been at the helm for the past 10 years and seen the Left’s being reduced to a single digit force. Perhaps the most trying phase for Mr Karat was when UPA I was negotiating with the US over the nuclear deal and the subsequent withdrawal of support.

In fact, the perception in the media was that his differences with the former Prime Minister Dr Manmohan Singh was more personal in nature than ideological. “No, these things are not personal for us. I implemented a decision of the central committee that said we should do everything to stop the deal,” said Mr Karat and added, “In retrospect, our central committee criticised and said we took too long to withdraw support to the UPA government.”