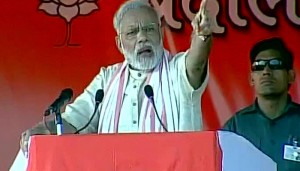 BANKA(Bihar): It will be double celebration in Bihar this Diwali, one for the festival and other for the poll results, according to Prime Minister Narendra Modi who was campaigning in Banka on Friday.

Citing a World Bank report on ease of doing business, he said that Bihar continues to lag behind at 27th place among Indian states unlike Jharkhand which was ruled by BJP after bifurcation, progressed from 29th to 3rd place.
Modi also talked about meeting a delegation of people from Bihar in the US during his recent visit and said they were more worried about changing the fortunes of their home state.