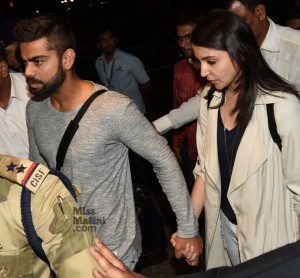 MUMBAI:”Dil Dhadakne Do” actress Anushka Sharma has refuted rumours that she is tying the knot with cricketer boyfriend Virat Kohli.Anushka, 27, opened about her relationship with Virat last December and since then they have been facing marriage rumours.

The latest grapevine suggested that the 26-year-old cricketer was planning to move in with the actress in Mumbai.
“There is no truth to the stories/rumours about Anushka Sharma’s impending wedding. Currently she is busy and happy with her work commitments,” read a statement on the behalf of Anushka.
“She has always been open about her life and would appreciate it and request everyone to wait for her to make announcements about her life instead of speculating,” the statement added.
Earlier, Anushka reportedly dated actor Ranveer Singh, with whom she worked on “Band Baaja Baaraat”, “Ladies vs Ricky Bahl” and this year’s release “Dil Dhadakne Do”.