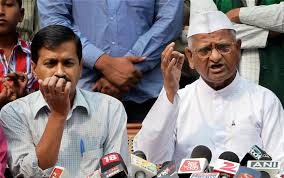 NEW DELHI: Veteran Gandhian and anti-corruption crusader Anna Hazare on Tuesday slammed Delhi Chief Minister Arvind Kejriwal for hugging tainted Rashtriya Janata Dal (RJD) chief Lalu Prasad Yadav during the swearing-in ceremony of Nitish Kumar in Patna.
While criticising Kejriwal, the 78-year-old said he was glad that he is not associated with the AAP chief anymore.
“Thank God that I am not associated with him anymore, otherwise my name would have also been dragged in the controversy,” said Anna.Kejriwal has been under severe attack from BJP after his photos hugging Lalu Prasad Yadav went viral on social media.

However, while defending himself, Kejriwal said it was the RJD chief who “pulled and hugged him”, and it did not amount to an “alliance”.
Kejriwal said that AAP worked “against BJP” during the Bihar Assembly polls and supported the chief ministerial candidature of Nitish Kumar.Kejriwal, who had declined to campaign for RJD chief Lalu Prasad Yadav, was seen hugging the former Bihar chief minister during the oath-taking ceremony of Nitish Kumar in Patna on November 20.