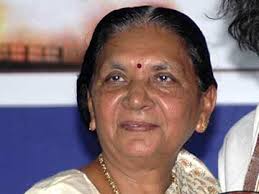 GANDHINAGAR: Narendra Modi Gujarat chief minister, will resign today after addressing a special session of the state assembly. His revenue minister Anandiben Patel is the front-runner to replace him in the state. If she is picked, Anandiben Patel, 72, will be Gujarat’s first woman chief minister. Mr Modi meanwhile is headed to Delhi and will be sworn in as India’s next Prime Minister on Monday, May 26. He has been Gujarat’s chief minister since 2001.
Ms Patel enjoys the complete trust of the Prime Minister-elect, and is also a non-controversial choice. She has stood by Mr Modi for many years even before he took over as Gujarat chief minister, including when in the mid 1990s, Mr Modi was banished from state politics after a confrontation with other state leaders.
Others in the running for the Gujarat chief minister’s post are Bhiku Dalsaniya, a general secretary in the party’s Gujarat unit, finance minister Nitin Patel and energy and petrochemical minister Saurabh Patel. But Anandiben Patel is seen as a distinct favourite.
She is known for her administrative acumen and has handled portfolios as diverse as revenue, education and urban development. The senior BJP leader, who was elected to the state assembly in 2012 from Ghatlodiya in Ahmedabad by margin of 1.10 lakh votes, is said to be a strict disciplinarian and a hard task-master. When Mr Modi began his grueling campaign schedule for the general elections, he picked Ms Patel to lead the Group of Ministers that was set up to run the state government.
Her biggest limitation, her colleagues say, is her lack of connect with the party’s grassroot-level workers and her inaccessibility. Interestingly, Anandiben Patel is not known to share a good rapport with Amit Shah, Mr Modi’s closest aide and the man who scripted the party’s spectacular performance in Uttar Pradesh which powered the BJP to a record haul of seats in Parliament.

Mr Shah has been an integral part of Mr Modi’s post-election strategy sessions too.